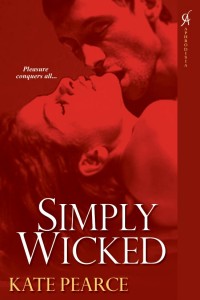 I can’t write with music on in the background. If I try, I end up adding the lyrics into my manuscript, which isn’t very helpful, or singing along and not concentrating at all. But sometimes, while I’m writing a book and I’m out picking up kids or shopping, something will come on the ipod that I recognize as having some interesting connection with either a character from the book or a general sense of the ‘theme’ of the book. Sometimes its the actual lyrics and other times its just the way the music makes me feel-if that makes any sense at all 🙂

For example, I’m a big Madonna fan and a couple of her songs have actually influenced or summed up some of my books.

To have and not to hold
So hot, yet so cold
My heart is in your hand
And yet you never stand
Close enough for me to have my way

To love but not to keep
To laugh, not to weep
Your eyes, they go right through
And yet you never do
Anything to make me want to stay

When I first heard this I immediately thought of Peter Howard from Simply Sexual because the words just epitomized how he feels about Valentin. But then, as I continued to write the series and was knee deep in Simply Sinful, I realized that the lyrics actually applied not only to Peter, but to how Valentin feels about Peter and how Sara feels about Valentin. An all-purpose song about the agonies of loving someone who doesn’t seem to want you in the same way.

Recently, I’ve been writing Simply Wicked, which comes out next month, and the book which is most closely related to it, Simply Insatiable, which comes out in May 2010. My musical inspiration this time comes from an unlikely source, The Red Hot Chili Peppers and isn’t as much directed as the lyrics, but more to the desperation inherent in the song and the situation that I felt mirrored the conflict between Anthony and himself and his conflict with Lord Minshom.

[Chorus:]
How long how long will I slide
Separate my side I don’t
I don’t believe it’s bad
Slit my throat
It’s all I ever

So, tell me, am I the only person who relates songs to books and themes and characters?

Happy Anniversary to me and Mr Kate Pearce! 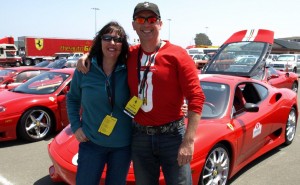 Well we made it through another year-and let me tell you folks, this one was a doozy 🙂 As soon as I find my list of 22 reasons from my previous blog as to why I love this man, I’ll post it-

To celebrate the fact that Mr Kate and me have been married for twenty-three years-yes twenty-three-as of yesterday, I thought I’d share some ‘romantic’ erm information/facts about the enigma of ‘Mr Kate’ and exactly why we’ve managed to remain married and still speaking to each other.

1. Mr Kate is not his real name.(gasp) When I told him I was writing a blog I was given strict instructions not to name him because he is a high up lardy-dah business type person.

2. Mr Kate now has several fans who work with him who read my blog and think it is hilarious that a big lardy-dah business man gets called Mr Kate.

3. Mr Kate is very fit. He goes to the gym three times a week and also rides a horse. I swear there is not an inch of flab to pinch on the man.

4. The first time we kissed, I knew I was going to marry him.

5. The first time we kissed, Mr Kate knew that we were going to have a problem avoiding over-bites.

6. On one of our first dates, Mr Kate scratched the immortal words “DD 4 CH” within a heart into the brickwork by my front door with his keys-where it still remains (as far as I know)

7. Mr Kate always writes the above message in every card he gives me.

8 Mr Kate likes AC/DC and loud rock music. He also had a fine collection of black T-shirts bearing band names when I first met him-come to think of it he still does.

9. Mr Kate also has a secret liking for Shania Twain and the occasional Madonna song. I’m sorry but his pathetic excuse of accidentally taking “Ray of Light’ on his business trips didn’t wash with me. I know he knows the words and can even be coaxed into the occasional philisophical discussion about what in the world will Madonna do next?

10. Mr Kate doesn’t drink coffee much as he is totally wired. If he was growing up these days he’d be classified as having ADHD. In our day, he was simply made to stand in the corner and told that he’d never make anything of himself.

13. His second dream job was ‘astronaut’. He’s still a total space addict. If he gets really rich I expect he’ll book himself a seat on a moon tour. (alone)

14. Mr Kate used to think it was funny to leap out at me and scare me. He doesn’t do it so much anymore because once I nearly expired with fright.

15. After our first ten years of marriage Mr Kate told me that he’d realized that when I shared something with him, it didn’t necessarily mean that I was asking him to fix it for me or tell me what to do. He had discovered empathy-a big moment in a man’s life.

16. After our first fifteen years of marriage he stopped taking my shoes upstairs and let me leave them on the bottom of the stairs. (did I mention he’s a cleaning nazi?)

17. He always tells me I look nice. Sometimes I have to stamp on his toes until he’ll tell me what he really thinks.

18. He thinks I look better without make up (he thinks I don’t wear it snort)

19. He loves me despite the fact that the first time he took me to dinner at his parents I lost a whole fried tomato up my sleeve and got trifle in my hair.

20. When our daughter was born, he got up at four a.m. every morning to feed her so that I could sleep and never missed a night.

Can you see why he’s so lovable? I’m a very lucky lady

This week he fixed the tumble dryer, unblocked my bathroom sink and patiently played myepets.com with our daughter. What a man.

Best Author in the World Madness

One day when I have reached the dizzy heights of best romance author IN THE WORLD, there are a few things I intend to do with my crazy superstar life. I thought you might enjoy hearing some of the wackiest ideas I’ve had so far, because hey, if you’re really really famous you get to do what you like, right?
Right?

Today I’m sharing some of the thoughts I’ve had for my back yard-which will be BIG. 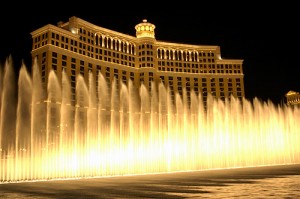 1. In the backyard of my fabulous mega-mansion set on the hills of a remote lake in Italy, I want the Bellagio Fountains from Las Vegas, (or their equivalent) At 6 p.m. every night a gong will sound and all the drapes and windows leading out onto my fabulous patio and pool area will miraculously open to reveal-the fountains and the music of my choice. Fabulous, right? And totally appropriate for a romance writer.

2. When the fountains aren’t going during the daytime, I figure I’ll need something else to entertain my guests, so every hour there will be a show from some synchronized swimmers, and maybe, depending on quite how crazy I feel, a few dolphins or Shamu thrown in. Maybe even Michael Phelps… 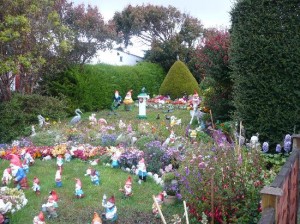 3. I love Gnomes, I have no idea why. I believe I’ll blame my next door neighbors in London who had some that I loved when I was a kid. I also understand that many people hate garden gnomes and throw them out when they purchase a property-horrors! I propose to set up a Gnome sanctuary in my vast estates, where people can leave their unwanted gnomes and be sure that they will be safe with someone who loves them, that they will receive regular upkeep, a fresh coat of paint and security for ever more… 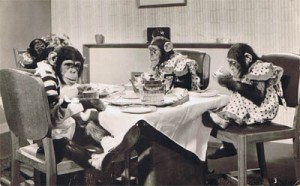 4. Now this one is for when I finally go off my rocker and yes, I know it’s not pc or okay, etc etc and I’d never really do it, but, ever since I was a kid, and I totally blame PG Tips Tea for this one, I’ve wanted a chimpanzee, a little girl one in a frock so we can wear matching outfits and go out together hand in hand.

So, dear readers, what would you all do if you could have the craziest lifestyle ever?