Crystal’s new book is out today!

This is a good one-I know, I got to read it early-and it’s yummy 🙂

The biological warfare of the twenty-first century changed the planet in astonishing ways, transforming humans into shape-shifters who love to walk on the wild side—reveling in danger and the explosive desire that consumes them…

Desire For A Price

Half-human, half-lynx, Delilah Chase makes her living as a professional thief. But when half-human, half-hawk Hunter Avery catches her trying to steal his priceless ruby, he makes her a proposition: spend a week in his bed, or take a trip to jail. What follows is seven days of unrelenting, primitive passion neither can live without…

Desire With No Limits

As the owner of Tail, the most notorious techno brothel in New Chicago, mink-shifter Lorelei Chase specializes in fulfilling all of her clients’ kinky fantasies. She just has one rule: Never sample the goods that her customers or workers offer. But every day, jaguar-shifter Nolan Angelo and wolf-shifter Pierce Vaughn tempt her to break that rule—until she ultimately gives in to a burning lust that knows no control…

Another picture to drool over

A few weeks ago I was waiting at the hairdressers while son #3 was having all his lovely blond hair cut off, and I started reading People magazine. A few pages in I saw this ad. I can’t quite remember what the product was because of the guy in the picture. It was the first image I’d ever seen that reminded me of Valentin Sokorvsky from the first Simply book, Simply Sexual.

I have to tell you something…Valentin is still my favorite hero. I want to write at least another book about him because he simply intrigues me, and I know I haven’t really discovered all the fascinating hang-ups of his complex personality. I love all my heroes, even Lord Minshom and yet Val is the one I’d most like to meet.

So, you can imagine that I was thrilled to see an image of him. I checked the date on the People magazine but it was brand new, so I couldn’t bring myself to pinch the ad or to ask if I could have it because, then I would’ve looked weird. I went home and tried to google the ad but I couldn’t find it online anywhere. I resigned myself to never seeing that gorgeous face again.

Then last week I opened a thread on RWAOnline and there he was…the same guy, in a different ad, but it was definitely him! 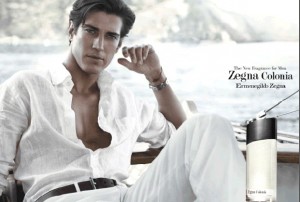 Okay, so not absolutely him, but the facial structure and the eyes? Very Valentin.
I know that some of you will now be disagreeing with me as your image of Valentin isn’t the same as mine at all-I know how that feels. it’s like when a film casts someone who looks nothing like the character in your head.
This is Oriol Elcacho, btw, just in case you’d like to go and check out some other pictures of him 😉
Oops I just accidentally ‘stumbled’ on another picture of him 🙂 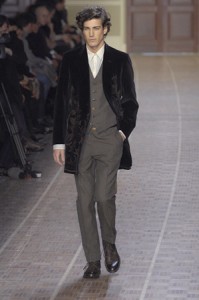 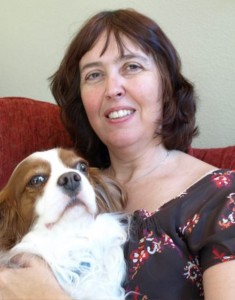 This is me, without make up and my dog, Hunter, who looks beautiful without make up, because he just is. I really don’t like photo’s of myself I don’t know why. It’s not that I think I’m pug ugly or anything, it’s just that I don’t ever think I look like a still picture of me because I’m always smiling or frowning, my face is a marvel of motion LOL.

I’m super busy at the moment trying to get Simply VI finished up and Tudor Vampire’s book #1 KISS OF THE ROSE, written. Both are coming along nicely, but I almost always get sick in November, so I’m trying to get everything done ahead of schedule so that I can just die quietly for a few days if I need to.

Trivia fact of the week. In all the books I have a little habit or giving the surnames of writers I admire to some of my characters. For example, Peter Howard is named after one of my all-time favorite writers, Linda Howard and Philip Ross, is named after another Julia Ross. Sprinkled in my books you’ll also find Austen, Roberts, Ward, and several other well-known names. It gives me a little thrill to put them in there as a sort of homage to my genre.
Now you’ll all be checking, won’t you?

Hi guys and thanks for entering. I wish you could all win 🙁 but here are the three lucky winners!

I’ll be contacting you shortly! Please feel free to email me at contactme@katepearce.com if you like, so we can avoid any spam traps.