Risking Eternity-out today from one of my favorite people :) 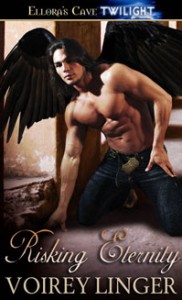 Such a pleasure when a writer (and friend) one knows and loves has their first book out! Especially when it comes out with my first-ever publisher too:) Big congrats to Voirey Linger and many sales! I loved this story 🙂

For two hundred years, Dominicus has lived in isolation, sentenced to take human souls to hell. But this night’s victim is unlike all the others. She tempts him. One kiss and she comes apart in his arms. One taste, and he can’t walk away.

But Maggie isn’t the only temptation he faces. Dominicus fights an attraction to Renatus, his best friend through the eons and a male with whom sex is forbidden. With her, he risks Hell, with him, losing the only piece of Heaven he has left.

Maggie cannot begin to understand what Dominicus has done. Demons covet her soul and Lucifer won’t give up his prize. In claiming her, he’s not only compounded his sin, he’s sparked a war between Heaven and Hell. Angels battle demons, and Dominicus must make a choice. Does he deliver to Lucifer the human whose soul calls to him and ensure his salvation, or save her and risk eternal damnation?

So why did I choose Lord Minshom to write about? 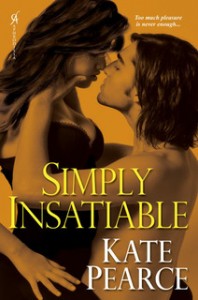 I get asked this question a lot, because everyone expected me to write about one of the twins next, preferably Christian, I think 🙂 (And I didn’t do that either.)

Toward the end of writing Simply Wicked I began to realize that Lord Minshom wasn’t quite as bad as he would like me to believe. And when, by the end of the book, he walks away from Anthony in disgust, I was intrigued. I happened to be in the process of deciding what book to write next and Minshom began to appeal to me as the next hero. But how to make such a hard unappealing character into a man my readers could invest in? I knew it wouldn’t be easy and I wasn’t sure if I was up to the task of doing him justice.

Like most mothers, I spend a lot of my time driving kids around and one day in the car I heard this song.
Raoul And The Kings Of Spain by Tears For Fears

And it made me think, especially the line about ‘breaks the chain’ because I realized that Minshom was going to do that. He was going to stop the cycle of abuse that had started before he was even born and continued with his father and his distant deceased mother. The song also, in my mind, referenced his relationship with his own wife. And once I knew that, and knew how hard that was going to be for him, I knew him and I knew how to write the book. 😉

The three winners of a signed copy of Simply Insatiable are 🙂

I’ll be in touch ladies!
Thank you to everyone who entered and for the lovely comments. I wish I could give books to you all, I really do 🙂
Kate x