Last week I went on a family vacation to Long Beach, California, a nice 5 hour drive away from where I live. One of the sights we were keen to visit was the old Cunard liner The Queen Mary. 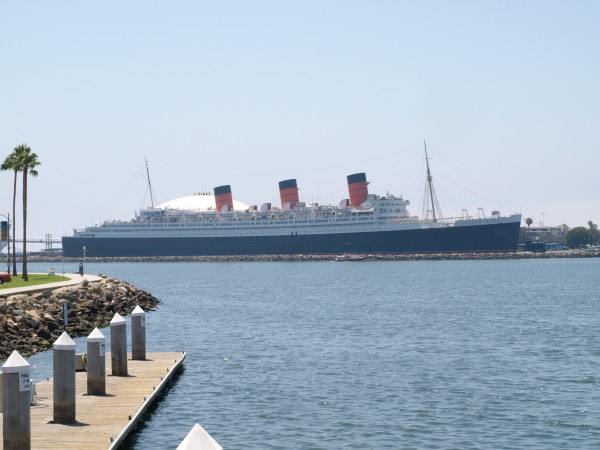 We ended up walking onto the lower decks of the ship where the entrance to the ‘Ghosts of the Queen Mary’ tour was scheduled to start. Now, halfway up the gang plank I’d already decided there was no way I was going to do this tour because a) I’m slightly claustrophobic, b) I’m a scaredy cat and c) sometimes I get these weird ‘vibes’ about places and have to get out.

The three members of the family who wanted to do the tour were allocated a later time so we decided to explore the ship while they waited. Two minutes in, my husband, boy #3 and my daughter are skipping merrily down a passageway lined with cabins. Son #2 and I both stop about three foot into the passage and stare at each other. Neither of us like it and want to get out.

So we call back the rest of the gang and head upward toward the airier spaces of the first class passenger entrance. As I’m walking I remember the old family gossip about my uncle who used to work for the Midland Bank and spent some of his time acting as a banker on voyages from Southampton to New York for this very passenger line. I’m thinking he was actually on the Queen Mary.

We get to a nicer, brighter level and just as we arrive a tour guide comes past us and points to a gift shop located in the corner and tells everyone that it used to be the office of the Midland Bank who operated the only bank on the liner. So it seemed that family gossip was accurate about this at least! 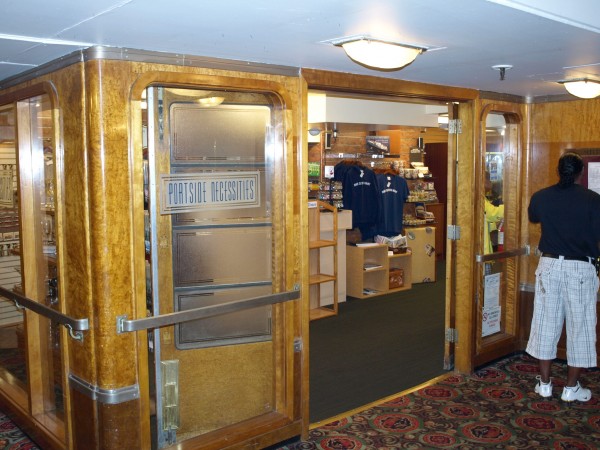 I was still uneasy on the ship and although I enjoyed the experience I wasn’t unhappy to leave.
I called my mother yesterday to tell her about the visit. she totally got the creepy vibe as it is something we share and she immediately confirmed that my uncle had been on the Queen Mary and it’s sister ship the Queen Elizabethm and that in those days-the early 1950’s, it was quite a stressful job as once he was at sea, he had to make all the financial decisions as to whom to loan money to without any back up.

There was also a lot of socializing involved and I imagined him, in his twenties, in his evening clothes chatting to all the ladies like some debonair man of the world. My mother said that to relieve the stress he obtained permission to play the big grand piano in the first class dance hall late at night. So he’d sit there in the moonlight playing happily to himself once everyone else had gone to bed. What a wonderful image. 🙂