Cover for Blood of the Rose 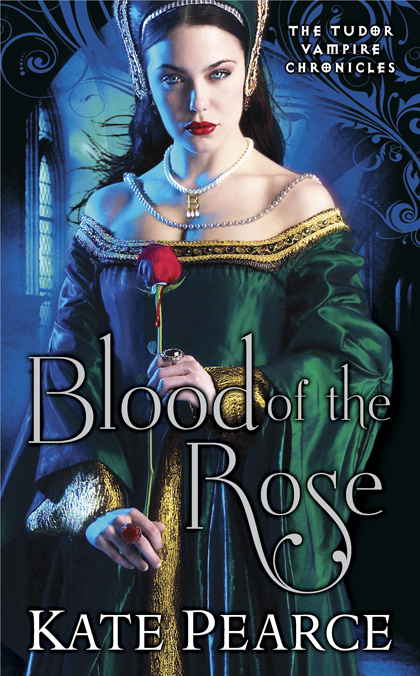 Here’s the blurb:
Desperate to defeat King Richard III and gain the English crown, Henry Tudor made a pact with the Druids that bound him and his heirs to the Druids’ deadly struggle against the Vampires. Ever since, the Llewellyns, an ancient Vampire-slaying family, have been in the permanent employ of the monarchy.

When Rosalind Llewellyn had to join forces with her enemy Christopher Ellis to defeat a rogue Vampire threatening Henry VIII, their alliance led to a surprising passion. Reunited after a year’s separation, they face a new threat that could destroy their last chance at happiness.

Christopher is delighted by the spectacular rise of his friends George and Anne Boleyn at court. But Rosalind suspects Lady Anne is up to no good—that she may even be a Vampire who’s bewitched the king. Now Rosalind must fight to keep Christopher from falling under the woman’s mysterious spell. It isn’t until Anne reveals a dark secret that Christopher awakens to where the true danger lies—and begins to play a desperate game in order to save the woman he loves…

This is for book #2 of The Tudor Vampire Chronicles, which is published in February 2011 from Signet Eclipse.
It’s the continuing story of Rosalind and Christopher’s complicated love life, which becomes even more interesting when Rosalind comes back to court and meets Christopher’s old friend, Anne Boleyn…