Emily Ryan Davis guest blogs and has a giveaway :)

What’s so sexy about a baby belly? 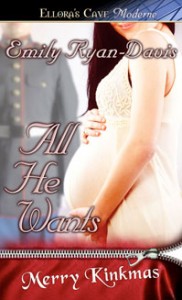 Good morning, Fans of Kate. I’m Emily Ryan-Davis and I’m fan too. I’m little fangirl-squealy to be able to say “I’m blogging at Kate Pearce’s site today”. I’m also fangirl-sad that my Saturday night trip to Barnes & Noble did not yield a copy of LORDS OF PASSION. Sold out, said the clerk. I had to place an order and now I’m not-so-patiently waiting.

While I’m waiting, I’m doing some other things. I recently participated in a Night Owl Reviews chat with several other authors who have stories out with Ellora’s Cave’s “Merry Kinkmas” series of holiday novellas. “Merry Kinkmas” seems to have all the bases covered, from phone sex fascinations and go-go boot obsessions to fur addictions and, in my novella, pregnancy fetishes.

During the course of the chat, the hostess asked me what’s so sexy about pregnancy that I was able to build a whole story around motherhood. The question gave me pause. Doesn’t everybody think “creating” is totally hot?

From a woman’s perspective, I think the power inherent in creating life is just so fascinating. Power in a woman’s hands always has the potential to be sexy but is often surrendered to a man. While I’ll be the last to complain about a man on top, I do appreciate strength that can’t be taken or gifted. Only a woman can create a child. She might have help but at the end of the day and at the end of the nine months, she is the one who has created life. No man can take that power away – woman owns it.

From a man’s perspective, what could possibly be more of a turn-on than visual proof of his mark? I’ve been asked why the hero of ALL HE WANTS has a pregnancy fetish, of all things, and I keep coming back to the primal need to prove possession. In ALL HE WANTS, Keith sees a mark of passage in Telly’s changing body. Keith isn’t the father but he desperately wants to be, not only because he wants to see a lifetime of longing fulfilled but also because he can’t stand the idea someone else left his mark on the woman who should have been his. Claiming Telly means claiming all of her. Because her pregnancy sparks that primal need to possess, he’s especially drawn to her physical changes.

Other men with pregnancy fetishes might have different drives. Maybe they’re totally turned on by larger breasts or the necessity for varied positions. I spent some time lurking on a pregnancy fetish forum and didn’t find many forthright examinations of the reason behind the attraction. Reasons included the pride boost of impending fatherhood, the extra sensitivities of a pregnant woman’s body, and a particular interest in “baby belly”. Keith has all the physical interest compounded by previously unrequited love and determination to finally have the woman he’s always wanted.

I’d like to give away a PDF of ALL HE WANTS, which released 11/30 at Ellora’s Cave. If you comment between now and 12/20 and let me know what you find sexy about motherhood and pregnancy, I’ll throw your name in the Santa Hat for a kinky holiday read.

And even if you don’t comment, I hope you have a great holiday season!

And if you want to see an interview with a real Marine who helped Emily out with some questions go here.