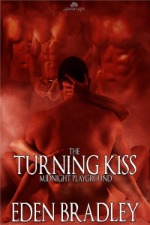 I’m so thrilled to be here with the fabulous Kate Pearce, an author I admire and adore! Today I’m here to celebrate a very exciting event-the release of Book Three in my Midnight Playground series. Why so exciting, you may ask? Well, my vampires always excite me-and yes, I *do* mean it like that! There’s nothing sexier than the seductive mystery of the vampire, which is why I love writing this series so much. And one of my favorite vampires, Ever, makes a big appearance in this book. *girlish sigh*

But this book is not entirely my darling Ever’s story (his comes in Book Four, EVERSONG). This book is the story of Calam, who made an appearance in Book Two, BLOODSONG. There was something about this strong Scotsman that captured my heart-and my desire!-even though his part in BLOODSONG was brief. And the perfect counterpart for him seemed to be the cool, contained Ilana, the friend of my heroine Nissa in Book One, THE SEEKING KISS. This story has a little twist that makes it a bit different from the other books in this series, but telling would be giving away too much! But I will tell you that a pair of hot vampires make their debut in THE TURNING KISS. Konstantine and Luka are from the Moscow Midnight Playground vampire sex club, newly arrived in London. This dark and sensual pair tempt Calam and Ilana, and are the catalysts that bring them together. Here’s a little peek:

They have nothing to lose…except the one gift they never expected to find.

Turned out onto the streets of Edinburgh as a child, Calam’s tortured path led him to a job at the club, where he also engages in exotic and dangerous sex play with its clientele. Craving, like Ilana, the eternal escape of the Turning Kiss.

Ilana is undeniably drawn to the beautiful Scotsman, but she has no time to waste; the club takes no one over thirty. When a sinfully compelling vampire pair brings them together for an unusual foursome, she and Calam are shocked to discover it isn’t the vampires they crave, it’s the tenderness and emotion they feel for each other.

After years of seeking to feel something, anything, other than the pain of the past, the ultimate gift is within Ilana’s reach. Yet the cost—leaving her heart behind with a mortal—could be more than she can bear.

She looked away, scanning the crowd. It was packed tonight. A few of the vampires had moved onto the dance floor. They were more than merely beautiful. Graceful beyond any human capacity. And among them were a pair she hadn’t seen before.

Two males, stunning, as the vampires always were. They were dressed alike in black leather pants and no shirts, both of them tall. One with a short crop of spiky brown hair and a tight, muscular body, porcelain pale skin. The other with a leaner build, his black hair hanging in a thick braid down his back. His face was exotic, his skin a shining gold, as if he were nearly exoskeletal, made of polished metal. They moved together, their bodies in perfect synchronicity. As she watched, they surged closer, until the short-haired one was straddling the thigh of the leaner one.

Need shimmered over her skin like a wave of heat as she watched them dance. They were exciting. Exquisite.
The short–haired vampire raised his gaze and gestured with his hand. It took her a moment to realize he was motioning to her. She took a breath, stood and joined them on the dance floor.

She felt the stinging warmth of their bodies close in around her as she moved with them, one on either side, hips and shoulders barely grazing her skin, in time with the music. Then a hard pair of hands smoothing over her shoulders. Desire was an instant, steady pulse beat between her thighs.

The one with the long braid, moving behind her, whispered in her ear, “I am Luka.”

“And I am Konstantine. You are Ilana, yes?” He spoke with a Russian accent, softened with time. She could feel the weight of his years as he stood before her, gazing into her face. She knew he was very old, older than the other one, Luka, by several centuries. “We have heard of you from some of the others. You are as enchanting as they said. And you smell luscious.” His voice was a low purr. “Human, yet something else…”

Luka leaned in, until she could feel his breath against her ear. “Yes. She smells like smoke. Like incense.” His accent was the same as Konstantine’s, perhaps a bit heavier, lyrical, with an exotic edge she couldn’t identify. “Like flowers.”

His eyeteeth gleamed in the pulsing lights, razor sharp and beautiful. She could see now his face was harsh featured, rugged, all hard edges and square lines. But gorgeous. His eyes were a deep, liquid brown, like two pieces of gleaming glass. His mouth was full and red, as if he’d recently drunk.

He took one of her hands, brought it to his lips, scraping his teeth across her knuckles. A wave of need rolled through her, staggering her. She swayed against Luka and he held her close, his hands closing around her waist. He had long, tapered fingers, the hands of a musician. She wanted to see him, to turn around, but she didn’t dare. And she was too stunned by them both, by the sensations already spearing into her sex, simply having them this close. In fact, she was soaking wet. Ready. For anything.

So ready she was surprised when she found herself distracted by the Scotsman stepping onto the dance floor with another vampire, a petite female with a lush, rounded figure, radiant ebony skin and curling dark hair. The vampire pulled him down for a brief kiss, and she felt a strange sensation in her chest. Envy? How could that be? He was merely human. And here she was with two vampires, both beautiful, exotic, and shining with that immortal light.

Luka’s hands moved down, his fingertips brushing the edge of her the low-slung skirt, and pleasure was like a knife, cutting into her, just as their teeth would later, if she were lucky enough.

“We offer you an invitation,” Konstantine said, still smiling. He reached out and ran one finger along her jaw. She trembled with need.

Yes, must have him. Must have them both.

“We want you with us this evening,” Luka whispered from behind her. Then he turned her in his arms.

His face was smooth, pretty almost. So different from Konstantine’s. A little androgynous. But every bit as beautiful. Incandescent. His eyes were a glowing hazel, silver and bronze and dusted with gold. His black hair was like liquid jet, dark and shining like a raven’s feathers. But with that hard gleam of the vampires.

As they took her hands and led her from the dance floor, she couldn’t help but notice the redheaded Scotsman once more, her heart giving a sharp thud.

Whatever was wrong with her? She had exactly what she wanted. Or the beginning of it, at least. Perhaps these two vampires would be the ones to offer her the ultimate gift. And in any case, they were offering her an evening of sex—the most amazing, mind-blowing sex any human could ask for.

She wanted it. Needed it. Her body hummed with that need, a stark desire so pure and strong, she was dizzy with it.

So what was it about that man?

He was human. Nothing more. She could put him out of her mind and focus on the pair of exquisite creatures who were leading her up the grand marble staircase to the private rooms upstairs.

She burned with need. For Luka, Konstantine. And some part of her she wanted to deny, but couldn’t, for that beautiful Scotsman with the charming dimple and the enormous muscles, who was in the arms of another vampire downstairs.

CONTEST!
A blog day is so much more fun when there’s a chance to win some goodies, so today I’ll give one reader a copy of Book One in this series, THE SEEKING KISS! This is what you have to do to enter: Visit my website to find the names of any two of my heroes from any of my books other than THE TURNING KISS (since the info is already here-can’t make it too easy-lol!). The names can be from one book, since I write a lot of ménage and more, or it can be heroes from two different books-take your time and browse around to find your favorites. Then comment here to be entered to win. To earn an extra entry, come on over to my Smutketeers Yahoo group and join, then let me know in your comment. I’ll choose a winner tomorrow night and announce it here.

Okay-enough website links! Thanks so much to my dear Kate for having me today. I hope to see everyone soon, online or in person at any of my upcoming events, including the exciting RT Booklovers Convention coming up in April in Los Angeles!

Cover for Mark of the Rose

Isn’t this awesome? And they really caught a flavor of both Verity and Rhys. 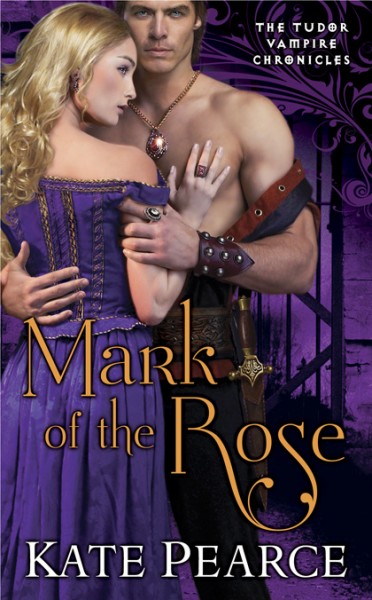 Here’s the blurb: This book will now come out on September 4th.
After hearing that Vampires have returned to the court of Henry VIII, Rhys Williams must form an unwanted alliance with Verity Llewellyn, a lady-in-waiting to the new queen. His childhood companion has grown into a clever and beautiful woman, but she is completely untried as a Vampire hunter.

The revelation that the queen is pregnant only makes the situation all the more dangerous. Who is systematically draining her blood and how, without being noticed? As Rhys and Verity work together to untangle the mystery, the battle to save the queen and the heir to the throne heats up—as does the uncontrollable passion between them.