When Nell mentioned she had written a book with a heroine called Kate who is renovating an old cottage and meets a ghost from the English Civil War era, I knew she was actually writing about me-I mean I knew I had to read the book!

Overworked, over budget and just so not over him! Kate would like an engagement ring from Steve but instead he’s lumbered them with a thirteenth renovation project, and doing up Myrtle Cottage disturbs a ghost from the English Civil War who has romance troubles of her own. 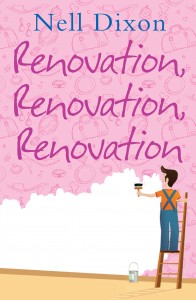 And here’s a little excerpt:

A movement in the undergrowth outside caught my eye and the sight of my cat, Mr Flibble making his way through the long grass towards the orchard at the side of the house bought a smile to my face. Mr Flibble was the one good thing that had come out of my seven-year relationship with Steve. Seven years, thirteen houses and all I had to show for it was a broken heart, a half-ruined house and a one-eyed cat I’d rescued from a dumpster.

A theatrical cough from the direction of the kitchen door alerted me to Steve’s presence in the kitchen.

I didn’t bother turning round. “Is there any hot water left?”

“The tank’ll fill up if you give it half an hour.” Steve sauntered past me crossing the neutral zone to reach his red-labelled cupboard. His hair was still wet from the bath and he hadn’t bothered to dress before coming downstairs. Instead he had wrapped one of the dark blue bath towels that my mother had given us as a gift two Christmases ago around his waist.

“You could get dressed before you come down here.” As soon as the words were out of my mouth I wished I could take them back. It was pointless saying anything like that to Steve. He’d do it all the more if he thought it would annoy me.

Back in his boy band days I would have found seeing Steve half-naked sexy, and we would have made love amongst the dust and debris of the kitchen. Thousands of screaming teenage Danger Line fans would have killed to take my place. Now having him roam around clad in only a towel was just one more of his annoying habits.

And here are the buy links.
Amazon UK

I’ll give away a copy to one lucky commenter below!!!