Apparently, I’m big in Canada-and next to ‘that book’

A friend of mine snapped this picture of Simply Carnal in a Canadian Walmart! Originally, I didn’t even know they had Walmart in Canada or that they would sell such explicit books!! But I’m smiling. 🙂 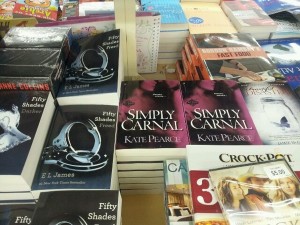 More thoughts about Simply Voracious :) and what’s to come next. 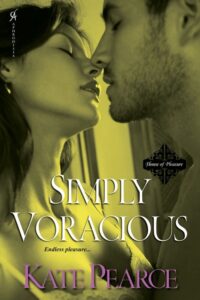 Sometimes I think it is interesting to post after a book came out about how I came to write it and what I felt about the characters etc by the end. Simply Voracious ended up being a slightly different book for me. It is quite long, about 93,000 words but even after all that, I still felt that by the end I was just setting the new relationship off rather than giving them their complete Happy Ever After.

I have no idea why that happened 😉 , except that I felt these characters, Paul, Lucky and Constantine were lovely people who had all ended up in a situation that they hadn’t quite expected, and were almost all at different points in their individual love stories. That meant even getting them to a point where they decided to commit to each other took a while. 🙂 So I suppose, it is more of a story about people falling in love and less about their sexual kink. That’s not going to make everyone happy, but sometimes you just have to write the book the way the characters seem to need it and not how you first envisioned it in your mind.

I put my Simply’s in two distinct categories 🙂 There are the shocking angsty ones like Sexual, Sinful, Wicked, Insatiable and Carnal and then there are the more thoughtful ones- Shameless, Forbidden and Voracious. Some readers like both, others like one type or the other. I just like to write them all. 🙂 Lucky me!

The last book in the series, Simply Scandalous concerns two couples- brother and sister, Richard and Emily Ross. Philip’s legitimate children. Both of them will find happiness-not with each other obviously, 😉 Emily’s love story has been growing through several books and Richard’s is just beginning. I’m very happy with that book too although the complexities of wrangling two loving couples nearly made me tear my hair out! But it was all worth it in the end.:) That one will be coming out in late December 2012, so not that long to go! I’ll have an excerpt up soon.

Much more to come this year and next-check out my website for info!