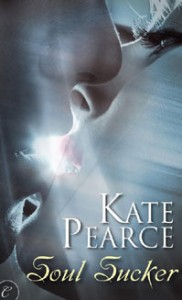 Ella Walsh cast one last look at the naked man sleeping in her bed, then frowned down at the note she was trying to write him. What the hell was the guy’s name? She’d hooked up with him in one of the tourist traps down by the beach last night and brought him back to her apartment for some hot and dirty sex. The sex had been mediocre, and his name still escaped her.

She settled for writing Hey, what’s up?—the universal Californian dude greeting—and went on to tell him that breakfast was in the refrigerator, coffee already brewed and to lock up when he left. He’d do what she told him. She’d already implanted the instructions in his mind and he wouldn’t be able to deviate from them. During sex, she avoided using her empath abilities to access her hook ups’ minds, but making sure they left and forgot what she looked like was essential.

She checked for her weapons and keys and headed for the door. While she fumbled in her pocket for her sunglasses, she screwed up her eyes against the blinding sunlight, barely glancing at her million-dollar view of the Golden Gate Bridge and the city of San Francisco looming in the mist across the bay.

As she headed down the driveway from her basement apartment a screen door rattled above her head and she immediately went for her weapon. She spun around to see her neighbor’s eight-year-old grandson waving at her from the balcony of his house. She waved back and he beckoned her urgently. After another quick look around, she turned back.

He didn’t smile. “That thing? It came back last night.”

“The thing under your bed?”

“Yeah. I saw more of it this time. You know in those alien movies when those creatures with the long bony fingers hug your face? It looked like that except more like long fingernails than claws.”

“Your gran lets you watch those movies?”

He shrugged off the question. “What should I do?”

She put a finger to her lips as his voice rose. “I’m serious. The first night I get a chance, I’ll come over and check it out with you.”

Tom studied her for a long moment. “You really believe me, don’t you?” His face reddened. “No one else does. They all think I’m a wuss.”

“I believe you.” She hesitated for a second. “Just keep it to yourself from now on, and we’ll deal with it together.”

She smiled, and then started to walk down the hill toward the oceanfront path that would take her to the Tiburon Ferry terminal. It was only a twenty-five-minute ride into San Francisco. It also gave her the necessary separation between her job and the rest of her life. Not that she had much of a life, but the older she got, the more she needed to distance herself from the craziness of dealing with Otherworld.

The thing under Tom’s bed didn’t worry her too much. It was unlikely to harm him, but it still needed investigating. If it was bold enough to allow itself to be seen, it might be stupid enough to try and take a bite out of the kid. And, whatever the species, bites were never good. Tom’s ability to see the creature so clearly was more disturbing. He obviously had some emerging psychic talent and, as a registered empath, she was required to report in with both governments if she saw the gift in anyone else. Like she’d ever do that.