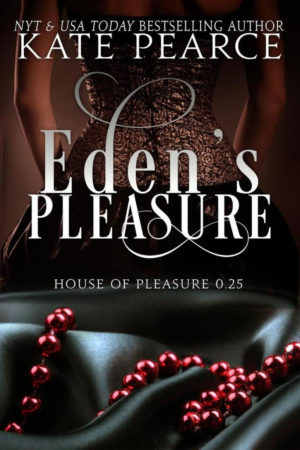 Eight years ago, after a summer of sexual dalliance with the notorious Harcourt twins, Eden was forced into marriage with an older man. Now widowed, she crosses paths with the twins again. Gideon Harcourt is determined that with his sensual help his twin, Gervase, will be given every opportunity to reignite his passion for Eden. Can these star-crossed lovers find happiness before family politics threaten to tear them apart again?

Note #2: This book has previously been published by Ellora’s Cave.

“Gideon, where in hell’s name are you? After leaving me desperate messages around half of London you should at least have the courtesy to be on your deathbed.”

My gaze flew to the door where Gervase, Gideon’s twin stood framed in the doorway. He hadn’t bothered to shed his cloak or his gloves and his guinea gold hair had curled in the rain. His face was harder than Gideon’s and his stance more rigid. I glimpsed the muted sheen of his scarlet and gold dress uniform under his muddy cloak. His narrowed blue eyes flew past Gideon and settled on me. I stiffened at the arctic blast of his furious gaze.

He stripped off his gloves as he advanced down the room, his attention on Gideon who displayed no visible alarm. “Georgiana told me that you had a new mistress.” He flicked a contemptuous glance in my direction, “Is that why you sent for me, to gloat?”

Before Gideon could speak, I leapt to my feet and came around the table to stand toe to toe with Gervase. I had to lift my chin to see into his eyes. Why did he suddenly seem so much taller and more threatening than Gideon?

“For your information, Gervase Harcourt, I am not your brother’s mistress.” My anger died a little at his skeptical stare. I forced myself to continue. “If you wish to inquire into what is a private matter between your brother and me, then I cannot stop you. I do not, however have to stand here and listen to you malign me.”

With a toss of my head I attempted to step around him. He caught my elbow and yanked me close.

“I was your first lover, Eden. Doesn’t that give me any rights?”

His voice was deeper and harder than I remembered. The compelling charm underscored by the harsh tones of command. His arm muscles flexed under his coat as he easily fought off my attempts to escape him.

I cast a quick glance over my shoulder at Gideon who looked unsurprised at this revelation. A vague foreboding came over me as I took in Gideon’s smug expression.

“You brought me here for Gervase, didn’t you?” I whispered. Gideon bowed his head in acknowledgment. “You wanted him to find me.”

Full of indignation, I again tried to slip free of Gervase’s unyielding fingers.

“Your rights, as you call them, Gervase, ended when you went off to London and left me to the mercy of your father and a hasty marriage.” I knew my voice was trembling but I could do nothing to control it. “What I choose to do with your brother in recompense for eight years of hell has nothing to do with you.”

Gervase retained his grip as he shrugged out of his cloak. “Hell, Eden? You know damn well why I left,” he roared. “You told me to!”

Gideon cleared his throat and brought a glass of brandy around the table to give to Gervase who continued to glare at me.

“Gervase,” he said softly, “Father recently told me why Eden asked you to leave. Will you allow me to…”