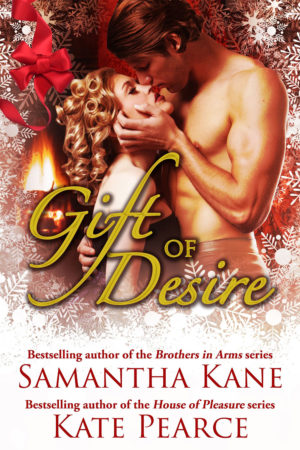 MY HEART’S DESIRE by Kate Pearce

After a dreadful disfiguring accident and the loss of her husband, Caroline Lyndhurst has spent the last two years hiding away from society. One man has never forgotten her. Jasper, Lord Mansell is determined not only to see her again, but to persuade her that in the spirit of Christmas, true love can bloom again.

THE GIFT by Samantha Kane

On Christmas Eve, 1817, Captain Jeremy Highsmith of the Royal Navy and his best friend Lieutenant Rhys Wilkinson return to England after almost a year in captivity. Their bond of friendship grew even stronger as they were tortured while being held for ransom by the Bey of Algiers. All that kept them going was the idea of returning to Jeremy’s wife, Cordelia, the woman they both courted and are both still in love with. But will Cordelia be willing to accept both of them…in her heart and her bed?

For Cordelia Highsmith, the greatest Christmas gift she could ever imagine is the return of her husband and his best friend. But can she accept the even greater gift they offer…the two of them, hers, forever?