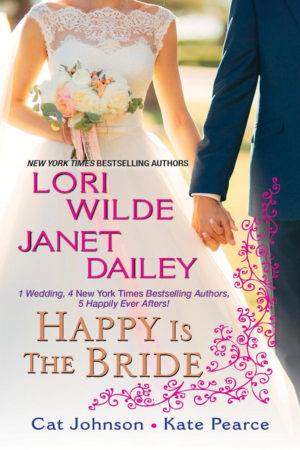 including Taming the Sheriff 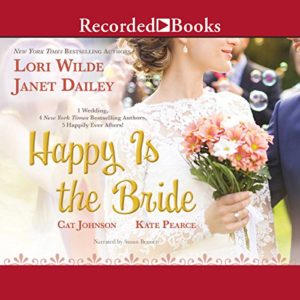 Stirring up all the romance and excitement a bride could hope for—plus a healthy dose of unforeseen shenanigans—four of today’s most dazzling bestselling authors deliver the wedding of the year, where there’s something—and someone—for everyone. . .

Opposites attract when a wealthy cattleman and a penniless artist decide to get hitched at a Texas dude ranch in tornado country—and the whirlwind festivities are as filled with surprises as their love . . . especially when the guest list includes: one pretty party crasher on a mission, a sheriff known as the One Night Stand King, and a workaholic event planner who definitely did not plan to fall for a laid back cowboy. Toss in a shocking behind-the-scenes bet, a fateful power outage, and a Man of Honor and a Best Woman determined to see the worst in each other (between hot kisses), plus thrilling lessons in love at first—and second—sight, and the celebrations are going to go all night long!

“Taming the Sheriff” by Kate Pearce
If you’ve read The Maverick Cowboy you might remember Jenna’s fake boyfriend, Nate Turner, the deputy sheriff of Morgantown. In this story, Nate goes off to a wedding in Texas and gets involved with a very pretty wedding crasher with secrets to keep.

The book also includes:
“Man of Honor” by Lori Wilde
“Getting Saddled” by Cat Johnson
“The Wedding Bet” by Janet Dailey