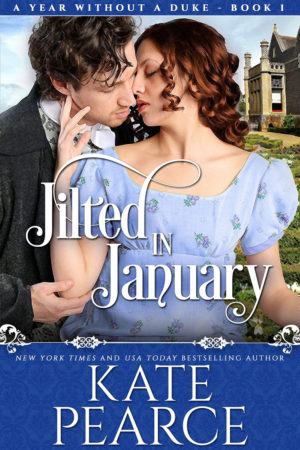 A YEAR WITHOUT A DUKE

The duke has died. Long live the duke! The only problem is no one knows who the new Duke of Beckworth is. All of England wonders, but no one more so than the people who depend upon Beckworth for their livelihood. In 1816, a year so cold that the word “summer” is a cruel joke, that livelihood is even more uncertain. However, they are all about to find out, with the duke away, there is nothing more warming than scandal and love…

Rose Leyton is stuck at the Duke of Beckworth’s country estate waiting for the return of her betrothed. If it wasn’t for the handsome assistant land agent, Mr. Colin Ford, she might believe she had ceased to exist at all. But when her intended arrives things aren’t quite how she expected.

As the youngest son of an impoverished peer, Colin is all too aware of how it feels to be ignored. His impulsive offer to save Miss Leyton from an unwanted marriage quickly becomes more serious than either of them anticipated. Can they both step out of the shadows and find a way to true independence and happiness?

When matrimonial matters don’t go quite as planned, can one jilted bride and an unlikely hero save the day?

A YEAR WITHOUT A DUKE Multi-Author Series:

Please allow me to introduce myself. I am Mr. Reginald Tompkins of Richards, Thistlewaite, and Tompkins Solicitors based at Temple in London. We have handled the affairs of the Beckworth estate since 1740 and hope to continue in this role for the foreseeable future.

As you are the longest-serving and most senior member of the late Duke of Beckworth’s staff, I am writing to inform you of the search that is currently being pursued for the heir to the title. This has proven to be far more complicated than we envisioned. In the meantime, I wish to reassure you that all reasonable bills from the duke’s country estate will continue to be paid by this office, and that you should apply directly to me if you are in need.

The late duke spoke most highly of your skills, Mrs. Pemberley, and I am certain that we shall deal extremely well together until the unfortunate matter of the inheritance is sorted out and we can welcome a new duke to Beckworth.

p.s. Please ask the land agent, or his new assistant, Mr. Colin Ford, to send me his quarterly report directly.

“Devil take it, what on earth am I supposed to do now?”

Colin Ford stood with his back against the door and surveyed the inner sanctum of the land agent’s office. The desk was piled high with official-looking docu- ments and discarded ledgers. Every drawer was open—the contents spilling out onto the floor—and the shelves bearing leather-bound estate books dating back for the last one hundred years had been ransacked.

With a groan, Colin picked his way through the debris and came around to the rear of the enormous desk. On top of a lopsided pile of books, there was a single sheet of paper anchored under an open silver inkstand. Reaching forward, Colin took the paper and read the scrawled words out loud.

“I resign. Yours, Archibald Morehouse.”

Colin took another deep, shuddering breath. Mr. Morehouse was supposed to have been teaching him how to manage a large estate. In the months he’d spent at Beckworth Park, all he’d learned was how to keep out of the drunken land agent’s way. His offers to help had been rebuffed, and now he could see why.

As soon as the London solicitors confirmed the tidings of the Duke of Beckworth’s death and wanted more information about the principal estate, Mr. Morehouse had bolted. It had taken Colin a month to find the spare key to the estate office and get inside. Now he wished he hadn’t bothered.

Crouching down, he spotted the strongbox that was supposed to hold monies needed for the everyday expenses of the estate. It was open, and a single farthing glint- ed in the black depths. With a curse, Colin sank to the floor and held his head in his hands. There was no money to pay the outdoor staff their quarterly wages. Archibald Morehouse had absconded with the lot.

As the assistant land agent, would he be held responsible for his predecessor’s crimes? He damn well hoped not. Perhaps it was time to write to his father and ask for help. Even the thought of putting pen to paper and exposing his deficiencies to his irascible sire made him feel nauseated.

After a while, a persistent tapping had him looking back at the closed door. He shot to his feet.

He was relieved to see that it was only the housekeeper, Mrs. Pemberley, and not the butler, who could be rather intimidating. She was a kind woman who had made him welcome at the estate and continued to treat him like a favorite son.

“Good Lord!” Mrs. Pemberley covered her mouth with her hand. “What on earth did Mr. Morehouse do?”

Colin made a hopeless gesture. “Stole all the available coin, for one. I haven’t even attempted to investigate the rest of it yet.”

“Dear me. I never liked the man, but what possessed him to run away like a thief in the night?”

“I won’t know until I’ve straightened everything out.” Colin pushed his unruly hair out of his face. “Is it possible that one of the maids could be spared to help me set this place to rights?”

“I’ll see what I can do, Mr. Ford.” Mrs. Pemberley smoothed her apron down over her black dress. “We are rather shorthanded at the moment, as you know.”

He couldn’t decide whether the recently widowed duchess’s absence was a blessing or a curse. At least she wasn’t here to see the disastrous state of the books, and she’d taken some of the servants to London, meaning there were fewer to pay.

“There is one more thing.” He cleared his throat. “All the ready cash has been taken. I have no coin to pay the outdoor staff their wages this quarter or to settle with the local tradesmen.”

Mrs. Pemberley tutted and shook her head. “I have some coin set by for the servants’ wages. We can use that if necessary, although luckily the last quarter has only just passed. I will apply to the duke’s solicitors in London for more funds. They seem to be quite accommodating, and they are well aware that some difficulties will arise due to the absence of the duke’s heir.”

“I suppose I should write to those gentlemen myself.” Colin brushed at some accumulated dust on the pile of ledgers. “They will need to know about Mr. Morehouse’s desertion.”

“Indeed. I believe they are expecting to hear from you.”

“Perhaps I should wait until I can give a full accounting of myself before I bother them with this matter,” Colin said quickly.

“You must do as you think best, Mr. Ford. From what I have observed of your character so far, you are a gentleman and will thus behave appropriately.”

Colin picked up a handful of scattered papers and studied them. “Mr. Morehouse was supposed to be a gentleman.”

“The fifth son.” Colin’s shoulders slumped. “Trust me, it means nothing but that I am obliged to make my own way in the world with no money and no prospects.”

“Be that as it may, I am sure you will come about. There is no need to bother Her Grace about this matter. She has enough to deal with—being widowed at such a young age.” Mrs. Pemberley gave him an imperious nod worthy of the queen and sailed out, her black skirt billowing behind her.

Colin sank into the chair and surveyed the mess.

He was still staring at it when there was another tap on the door.

“Mr. Ford? Mrs. Pemberley said you would appreciate some help with the— Oh, my word, what happened?”

He thought that was her name. She was one of the indistinguishable gaggle of female hangers-on that inevitably collected at a titled nobleman’s estate when they had nowhere else to go. Not that he didn’t pity anyone in such straits. He knew all about being a gentleman who had no inheritance and had to sing for his own supper.

She came farther into the room, her drab muslin dress stirring up the dust. She wore no jewelry, and her mouse-brown hair was braided tightly to her head. He thought her to be about his own age, but that was about all he knew of her. She’d always seemed pleasant enough when he’d encountered her at the dinner table. The duchess had always treated him as a valued member of the family rather than a servant.

“Good morning, Miss Leyton.” Colin bowed. “I believe Mr. Morehouse has left me in something of a pickle.”

“Neither did I,” Colin confessed.

She shot him a quick glance. “The maids told me about your efforts to be informed and his determination to keep all the secrets to himself. Perhaps you were lucky to be kept in ignorance after all.”

“I’m not sure about that. He has left a letter of resignation, which I assume means I am now in charge of this disaster.”

“Then where do you wish me to start?”

Colin frowned. “I do not expect you to do such menial work, Miss Leyton. Surely a maid can be spared?”

Her smile wavered. “I have nothing else to do but sew endless seams, run errands for my relatives, and read verses from the Bible to Great-Aunt Maude. I’m also quite tired of staring out of the window and worrying about my future. Doing something useful would be a pleasure.”

Colin studied her resolute expression. He knew exactly how it felt to need a purpose in life. His father had always considered him useless, as did most of society where the heir got everything and the other sons were seen as lazy drones doomed to be kicked out of the hive when they were no longer necessary. “Then be my guest. Perhaps you could start by putting the bookshelves to rights?”

She nodded and walked past him to the book-lined wall. “I wonder why Mr. Morehouse left the place in such a state? It’s almost as if he were searching for something.”

“Probably looking for money or items he could steal and pawn.” Colin bent to pick up a handful of scattered pages and placed them on the desk. “One has to suspect that his bookkeeping will be as irregular as his departure.”

“Agreed.” She stacked three books together, rearranged their order, and inserted them neatly onto the empty shelf. “I don’t envy you the task of sorting it all out.”

“I actually enjoy the intricacies of finance,” Colin confessed as he gathered up more loose pages. “There is a certain satisfaction in making the books balance at the end of a quarter.”

His father had scoffed at him for such a nonsensical notion, stating that tradesmen and menials existed to wait on their betters and should be grateful to have a peer’s patronage and be paid at all.

Miss Leyton continued putting the books away, bending and stretching in a graceful way that reminded Colin of the dancers he’d ogled on the London stage during his misspent youth. This revelation made him feel rather uncomfortable, seeing as Miss Leyton was undoubtedly a lady.

“Have you heard any more news about the duke?” Miss Leyton inquired. “We are all wondering who on earth he will be. Great-Aunt Maude is already combing the family tree to see if she can ascertain in which branch the heir resides.” She sighed. “It seems as if the Beckworth male line is remarkably thin.”

“Unlike my family where there are so many males that there is no room in the family Bible.”