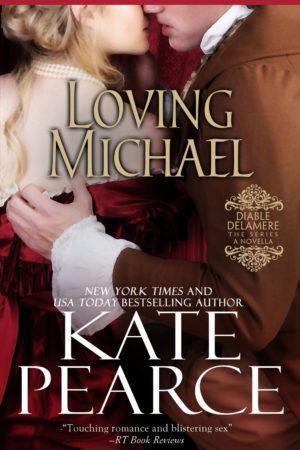 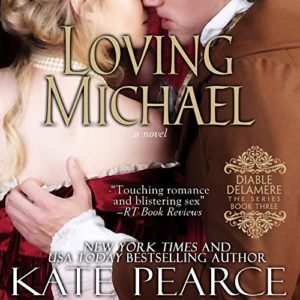 Since returning from the peninsular wars, Michael Waterstone has learned to live within restricted boundaries and taught himself not to yearn for what he can never have. Fortunately for him, ex-courtesan Angelique Delisle is no respecter of boundaries of any kind, and offers him a provocative Christmas wager that might change his life forever…

Loving Michael is a short story connected to the two previous Diable Delamere books, Educating Elizabeth and Redeeming Jack. I do hope you enjoy it. Also included in this book, as a bonus is another short Regency story, A Right And Proper Apology, which was previously in an anthology and needed a good home.

Michael Waterstone flexed his fingers, gripped his quill pen and started yet another letter his employer, the Duke of Diable Delamere needed to be finished before the end of the day. In truth, he enjoyed the intellectual stimulation of his work, but sometimes, on days like today, when the winter sun was shining and the sky was a crisp blue he wanted nothing more than to fling his inkpot out the window and climb out after it.

Unfortunately, that was not possible.

The sound of raised voices had him looking toward the door of his office, and carefully returning his dripping pen to the inkpot. His sister Elizabeth’s marriage to the Duke of Diable Delamere was nothing short of miraculous, but one could hardly describe their union as easy.

His sister was intelligent and opinionated. The duke even more so, and half- French, which made their disagreements both frequent and predictable. Michael held his breath as his sister sailed into his office talking over her shoulder at her spouse who didn’t appear to be amused by whatever edict Elizabeth was citing.

“Michael.” Elizabeth came to a halt in front of his desk. “Tell him.”

He took off his spectacles and surveyed his sister. Her grey eyes were sparkling, and her cheeks were flushed red either from the cold or indignation.

Michael nodded to his employer who had taken a stand on the hearthrug in front of the fire with his hands behind his back.
“Your Grace.”

Michael had no idea how Elizabeth had the nerve to rile the duke who wasn’t known for his sweetness of temper or his ability to suffer fools gladly.

“Tell His Grace that our mother had no difficulty carrying her children, and that I don’t expect to do so either.”

“I—” Michael risked a glance at the duke whose expression became even more glacial. “I have no idea what you are talking about, Elizabeth.”

“Oh, for goodness sake!” she exclaimed. “Just agree with me.”

“But how can I do that when I have no knowledge about the subject?”

She narrowed her eyes at him. “Then lie. I’m your sister.”

“Your brother is in my employ, ma belle, “ the duke said softly. “Perhaps he doesn’t wish to be drawn into a discussion of a matter that is surely meant to be resolved privately.”

There was a hint of a warning in the duke’s voice that his wife seemed unable or unwilling to recognize. For the second time in an hour, Michael gazed longingly at the window and contemplated escape.

“I’m merely suggesting that trying to smother me for the duration of my pregnancy is not an option.” Elizabeth snapped.

“I do apologize Your Grace, I—” Elizabeth took off her bonnet and swung around to glare at Michael again.

“Yes, Michael, I am. I’m also determined to have a happy and healthy pregnancy, if that man over there,” She pointed at the duke who looked distinctly unamused, “Will simply allow me to do so!”

Ignoring both her husband and her brother, the duchess turned on her heel and walked out slamming the door behind her.

Michael spoke to his blotter. “She doesn’t mean to be difficult, Your Grace. It’s just then when she’s worried about something she tends to become rather… stubborn.”

“Do you think I don’t know that?” The duke sighed. “I handled her very badly. After her experiences with your mother and stepfather I should have remembered how much she hates feeling trapped. I’ll go up to her. I apologize for placing you in such a difficult situation.”

“I’m sure you are.” The duke paused at the door and looked back at Michael. “If Angelique arrives early for her appointment, tell her I might be delayed.”

“Thank you.” The duke still lingered. “It will be hard for me not to worry about my duchess. I almost lost her once, and have already buried a son. I am…perhaps a little weary of losing those I love.”

Michael didn’t reply to that startling confession and kept his gaze on his work. Being the duke’s brother-in-law and his secretary was sometimes more complicated than he’d imagined. But anything was better than being trapped in one room wasting away while his mother refused to acknowledge his existence…

With another last glance at the world outside where the sun was being replaced by dark threatening clouds filled with snow, he returned to writing his letters. If he knew the ducal couple, they’d argue passionately and make up their differences in bed. It wasn’t the way he would manage a marriage, but it seemed to work well for them.

“Good evening, Michael, where is the duke?”

He looked up to discover the hours had passed and that it was now dusk. Angelique Delisle was standing in front of his desk tapping her foot as she peered at him through the darkness. She wore a blue pelisse trimmed with swansdown and a tall bonnet with ostrich feathers that almost brushed the chandelier above her head. She’d already discarded her huge fur muff on a chair.

“Good evening, Angelique. Are you here for your four o’clock appointment?”

“Yes, although I am a trifle late. One of my little treasures was ill.”

Michael glanced at the clock. It was past six, but Angelique had never been punctual and she was devoted to her revolting little white dogs. She was an interesting woman; a refugee from the Revolution who had fled with the duke and for a long while had been his acknowledged mistress. Even more fascinating was that she and Elizabeth were now good friends.
She was one of the most beautiful women Michael had ever seen. Her hair was guinea gold and curled naturally into ringlets, her body curved in all the right places and she was petite. She reminded him of a china doll, or an elusive fairy from the tales of his childhood. She also featured in many of his most feverish and imaginative dreams…

He realized he’d been staring at her for far too long. “I do apologize Angelique, the duke is upstairs with the duchess.”

“Then I’ll go up to him.” She gathered her gauzy silk skirts in one hand.

“I wouldn’t do that. They probably aren’t in the drawing room.” He cleared his throat. “There was some…contretemps’ earlier and…”

“Did she tell him she was enceinte?” Angelique threw up her hands. “Mon dieu, I knew he would react badly.”

“The duke wasn’t the one who was flying into alt.”

“Gervase doesn’t need to lose his temper to be annoying, I know that all too well.” She snapped her fingers. “He says something as if it is a command straight from God and instantly expects to be obeyed!”

“And a very arrogant man, do not forget that.”

As she talked, Michael began to see why Elizabeth got on so well with Angelique. They were both inclined to treat the duke with a remarkable lack of respect.

“I will go up.” Angelique announced firmly in her lilting French accent.

Michael held up his hand. “Let me ring for the butler and ascertain if the duke is receiving visitors.”

“Why?” She shrugged. “It’s not as if I haven’t seen him naked before.”

“But the duchess might not appreciate your presence if she is naked, too.”

Angelique subsided onto the corner of his desk. “I suppose you are right. Things aren’t quite the same anymore, are they?” She winked at him. “I suspect Elizabeth would have my head if I walked into her bedchamber and found her and the duke en dishabille.”

Luckily, Michael didn’t have to reply as the butler appeared to remind him that dinner was about to be served in the dining room.

Angelique went to the door. ”Shall we eat together while we await the appearance of the duke? I’m famished.”

“That would be lovely.”

She held the door open wide as he maneuvered his wheelchair out from behind the desk and headed for the hallway.

“No, thank you.” He kept his voice mild and his smile relaxed. “I can manage.”

Unlike his sister and brothers who tended to hover over him as if he were a small child in walking strings, she took him at his word and went ahead, chattering about inconsequential matters as they progressed.

He took his usual seat on the duke’s right, even though the place was empty and she sat beside him. An appetizing smell of carrot and brandy soup wafted out from under one of the closed lids.