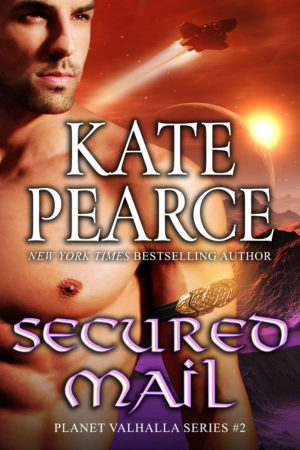 “Kate Pearce has done it again. What a wonderful world she has created in Valhalla. How can you dislike a world where women are so important and in such short supply that the most important thing in a man’s life is to bring pleasure to his woman? I envied Douglass Fraser when she crash landed on Valhalla in the previous book in this series. I didn’t think I would envy Thea as much, but I was wrong. Working with a recently discovered alien race of hot, sexy Viking men, being the object of desire of one especially handsome man, and engaging in some rollicking, good sex, Thea is definitely the object of my jealousy whereas Sven is a new fodder for some fantasies. I really enjoyed the simple plot in SECURED MAIL. It was uncomplicated, straightforward and accomplished the goal of setting up the relationship between Sven and Thea. SECURED MAIL is a book you definitely don’t want to miss!”
—5 Angels, Fallen Angel Reviews

“SECURED MAIL is the second story in Kate Pearce’s Valhalla series, following PLANET MAIL. The first story went very far to establish the society of Valhalla as one in which women are valued and worshipped and their men feel honored to serve them—every woman’s dream. SECURED MAIL takes that idea and twists it, showing how one woman’s dream is another woman’s dilemma. Thea has no problem with being honored by her man, but she also wants him to know that she’s his equal.

“This is one of the things I like about this series. While it presents a utopia where women are valued by all men and any one of them would do anything to have one of his own, it also shows that an idea like that is impossible because being placed on a such a pedestal would eventually become a burden.

“I really enjoy this series with its strong Viking heroes and headstrong, determined heroines. SECURED MAIL can be read as a stand-alone book, but for more background about the Valhallan series PLANET MAIL should be read first. I look forward to seeing where this series goes next.”
—4 Blue Ribbons, Romance Junkies

Note: Though this book can be read as a stand alone, it is the sequel to Planet Mail. Contains ménage scenes.

Note #2: This book has been previously published elsewhere.

Sven Magnusson scowled at the red-faced man he held by the throat, a foot off the ground. Yet another reporter who had risked his life scaling the eight-foot high walls that surrounded the Royal Valhalla residence in the Earth city of San Francisco.

“You are trespassing, scum.”

He emphasized each word with a gradual tightening of his fingers around the man’s neck. The reporter made a squeaking sound and his high color headed toward an interesting shade of purple.

“Magnusson, put him down.”

Sven sighed as an all-too-familiar female voice spoke behind him.

“He is trespassing. He is endangering my king and queen.”

“He’s a reporter. The only thing he’s likely to shoot is an out of focus picture of the queen picking daisies in the yard.” She nudged his arm. “Put him down.”

Sven clenched his teeth and gradually relaxed his grip. Ms. Cooper was right as usual. She insisted he called her that. Not Miss, not Ma’am or my lady, but Ms., whatever that meant. He couldn’t risk killing a citizen of Earth. It would only result in the kind of publicity he was trying to avoid. With a grunt, he lowered the guy to the ground.

The reporter sagged against the wall, one hand struggling to unbutton his collar. “I’ll sue, you bastard. “

Sven took a step forward and found his path blocked by Ms. Cooper. She placed a hand on his chest and tried to push him back. If he hadn’t been so angry he might’ve laughed. She was six inches shorter than him and probably half his weight. One flex of his biceps and he could push past her and have her on her back within a second.

Her short nails, which were planted on his chest, were painted pink. Sven inhaled the scent of her perfume, some Earth flower he didn’t know the name of, and imagined her flat on her back while he knelt between her thighs thrusting his cock into her warm, wet, willing…

He stopped licking his lips and looked down into her suspicious gray eyes. Six weeks ago, Ms. Cooper had joined the elite squad guarding the Valhalla Embassy and Sven still hadn’t gotten over it. Half the time he wanted to kiss her just to stop her telling him what to do. The other half, he just wanted to kiss her.

He rubbed his jaw and considered the angry little man in front of him. “He may leave quietly or I will call the police. Which do you think he would prefer?”

The reporter struggled to clear his throat as he directed his gaze at Ms. Cooper.

“I’ll leave, but don’t be surprised to hear from my lawyer.” He pointed at Sven. “That guy is a fucking menace.”

Before she could stop him again, Sven growled low in his throat and came around Ms. Cooper. “Get out, scum, or you will not have the ability to call anyone because I will have ripped out your vocal chords.”

Sven smiled as the man headed off down the driveway toward the main security post. He would have to walk half a mile just to get back to the gate and his reception there wouldn’t be pleasant. There was obviously another weak spot in the perimeter. Keeping the compound secure was as difficult as stopping sand running through his fingers. Sven glanced up at the leaden skies. If the man was really unlucky he’d also get caught in one of the San Francisco summer storms.

“Do you have to be so brutal?”

He turned to his companion who was regarding him with unfriendly eyes.

“If it means I keep my king and queen safe, then yes.”

“But what happens if he calls a lawyer and sues you?”

Sven shrugged. “He would never live to testify.”

Her lips tightened and Sven fought a smile. She was almost as easy to tease as his queen, Douglass, who also came from Earth. For some reason, Earth women didn’t seem keen on men showing off their physical strength. Apparently, it was no longer considered civilized.

Sven continued to study Ms. Cooper. Her dark blue pants suit and gray turtleneck sweater covered her from the neck down to the top of her chunky black heeled boots. He had no idea what shape she was under all the layers of clothes she wore but it didn’t stop him imagining. Despite the heels, she still only came up to his shoulder. Her skin was pale and slightly freckled. He smiled as a faint ray of sunlight escaped the gathering clouds and deepened the hint of gold in her brown hair.

“Staring at me in an unprofessional manner.”

He dropped his gaze to her indignant face. “On my planet, appreciating a beautiful woman is not considered a crime. Why should I not look? I’m not touching you.”

He took a step closer and she raised her chin to stare into his eyes. “Back off, buddy.”