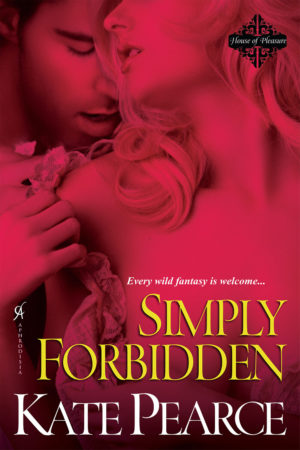 “Pearce’s House of Pleasure series continues with this intense, thought-provoking Regency-era novel that will cause you to ponder the events that shape people’s lives. The complex, troubled characters struggle with issues of abandonment, betrayal, trust and family relationships as they come to terms with their sexual proclivities. You get a great historical novel, a touching romance and blistering sex — with a little kink.”
—TOP PICK! 4 1/2 Stars, Joyce Morgan, RT BOOK Reviews

Lisette Delornay-Ross is used to belonging to two worlds—her father Philip’s aristocratic circles and her mother, Helene’s more risqué sexual empire. When she meets Major Lord Gabriel Swanfield, she is instantly attracted to him and more than willing to engage in her usual brand of flirtation. Scarred both physically and mentally by his sojourn in the Peninsular army, Gabriel lives a solitary existence on the fringes of London society.

So far Miss Ross had disappointed Gabriel. She had made no effort to ingratiate herself with him at dinner at all. In truth, she’d sat as far away from him as possible, and allowed the gushingly youthful and chatty Miss Emily to claim all his attention. He reckoned she had hardly spared him a glance but to laugh at his efforts to deflect the younger girl’s incessant questions about his life in the military.

He drank one obligatory glass of brandy, discussed horses with his host, which was no hardship at all, and excused himself from joining the ladies. He had no desire to sit between the debutantes and listen to them giggle all night. After his incarceration in Spain, he hated being shut in and hated the thought that he had to do anything to please anyone else at all. He’d rather be with the horses and breathe the clean, quiet air of the English countryside.

As he walked away from the house, he turned his face upward and inhaled. His cravat seemed too tight and he pulled at the carefully arranged folds until it came loose. The evening light was golden, the sky tipped with pink-edged clouds, and the horizon, a hazy blurring of light and impending darkness. Gabriel lit one of his narrow Spanish cigarillos and headed down to the stables. The smell of warm oat mash and manure didn’t bother him half as much as the over-perfumed and often under-washed bodies of his fellow guests.

“Now, please be a good horse and stand still.”

He halted by the stable, drawn to the sound of a now familiar French accent. What the devil was Miss Ross doing back here? He walked as quietly as he could up to the nearest stall, and peered over the door. She stood with her back against the wall, one hand reaching out toward the horse’s neck. She’d discarded the low-necked gown she’d worn to dinner, in favor of a simple blue dress, and stout boots. Her hair was drawn back from her arresting face in a single long braid.

She jumped so violently that the horse followed suit, and almost knocked her over. Instantly, he joined her in the stall and used his voice to calm the startled animal, his hands to sooth and placate.

He glanced over at her, but kept his hand on the horse’s rope halter, his attention on the high-spirited mare. “You frightened the horse. Don’t you know any better?”

“The horse was perfectly fine until you came along.”

“I’m not so sure about that.” He wanted to smile at the indignity of her tone, but kept his expression bland. “You could’ve been trampled or kicked.”

“I know.” She swallowed hard, and he noticed the pallor on her face, the terrified look in her hazel eyes.

“Miss Ross, if you are afraid of horses, why are you here?”

She looked directly at him then, as if trying to convince him that her fear meant nothing. “Because I am determined not to be.”

“So you wander into any stall and scare the living daylights out of the poor animal?”

Gabriel gave the mare one last reassuring pat. “Perhaps we should continue this discussion outside.” He opened the stall door and waited for Miss Ross to move past him before checking the latch was secure. She lingered in the narrow cobbled passageway between the stalls, her arms folded across her chest and her cheeks flushed. She looked far younger in her plain clothes than her dinner finery, and far more vulnerable. He found himself intrigued by the contrast.

“Well what?” She glared at him and he was reminded of her ability to disconcert him anew. “I do not have to explain myself to you.”

He closed in on her and deliberately blocked her exit. “That is true.”

She sighed. “But you will not let me pass until I do.”

He nodded and settled his shoulder more comfortably against the cold stones behind him. Eventually she looked at him.

Gabriel frowned. “Did you have a fall recently? Have you lost your nerve?”

“Lost my nerve? I’ve never had it.” Her smile was derisive. “I’m simply an appalling rider.”

He studied her from the tips of her boots to the top of her head. “I find it hard to believe your father would have allowed that. He must have set you on a horse as soon as you were able to stand.”

“I’ve only been riding for three years.” She took a deep breath. “I didn’t grow up here. I grew up in France.”

It was none of his business where she had grown up or how she had been raised, but Gabriel found himself wanting to ask, anyway. It seemed they had more in common than he had imagined, both displaced as children, both trying to overcome unusual circumstances in their lives. He curbed the unusual impulse and concentrated on the problem at hand.

“I could teach you.”

“Why would you do that?”

He shrugged. “Because the idea that anyone is too scared to ride appalls me. And it will give me something to do with my time rather than hiding in my room avoiding the other guests.” He motioned back at the stalls. “Is that the horse you normally ride?”

“Yes, that’s Sugarplum. I was trying to reacquaint myself with her before the hunt at the weekend.”

“Then meet me here tomorrow morning at five, and we’ll begin.”

She stared at him for a long moment and he stared right back, felt his body tighten and respond to the surprise in her hazel eyes.

He bowed and started to turn away and then remembered something important. “Borrow some breeches. I’ll teach you how to ride astride first.” He didn’t wait to see if she protested. If he was to teach her properly, he needed to see her legs. He smiled into the darkness and imagined those legs wrapped around his hips.

It was a long time since he’d been inspired to fantasize about sex, and his body responded far too enthusiastically. Miss Ross was an unusual woman. Beneath her charm and ability to appear as empty-headed as all society women obviously lurked a keen mind and a sharp tongue. He found himself excited by the contradictions she presented and far too ready to take her on. Unfortunately, as a protected upper class virgin, Miss Ross was unlikely to share his lusty enthusiasm for a quick roll in the hay.

Lisette glared after Lord Swanfield’s retreating figure. Why on earth had she agreed to meet him on the morrow or believe that he would help her? Something about the way he had calmed the horse and his softly spoken words had lulled her into a state of security. He seemed far more at ease with Sugarplum than he was with her, or with any of the other guests.

She sighed and started back up the slight slope to the house after him. He could at least have waited and escorted her inside, but that might have caused comment, and he avoided notice like the plague. She’d watched him surreptitiously over dinner, how he’d flinched at every loud noise, and every slight brush of Emily’s hand.

Had he suffered during the war? He was certainly physically scarred by it. Perhaps beneath his silence lay unimaginably awful experiences. When she got back to Town, she would inquire of her army friends as to exactly what Major Lord Gabriel Swanfield had gotten up to in the recent conflict. Perhaps that would help her understand him better.

She’d always enjoyed a puzzle and Lord Swanfield was certainly a challenge. Having caught her at a disadvantage, he’d seen her at her most vulnerable, stripped of artifice, and he hadn’t seemed to mind. In truth, something in his brusque manner encouraged her to be just as blunt, which was almost refreshing.

The house, ablaze with light, welcomed her, but she avoided the main entrance and turned toward the kitchen door. She didn’t want Christian to know she’d been out or guess whom she’d met; he was far too astute not to notice her interest in the enigmatic Lord Swanfield. And she was interested. She could no longer fool herself that she wasn’t. His unexpected appearance in the barn, and his surprising offer, had intrigued her.

Was he worth taking up Emily’s wager for? Lisette smiled at the direction of her thoughts. Surely not. All she had to do was get up early the next morning and see if he really was a man of his word.