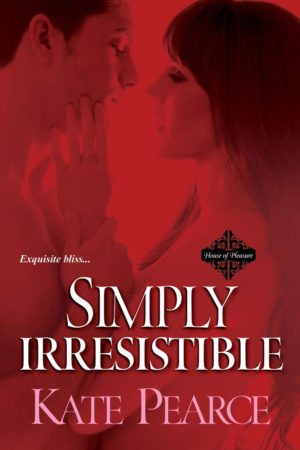 In Regency England bedchambers, almost anything goes in Kate Pearce’s House of Pleasures…

No one can deny the passion Abigail Beecham feels for Peter Howard. Not Peter, not Abigail, and, unfortunately, not Abigail’s husband James, a man with no interest in his wife or the society he long ago left behind. But despite longing for Peter, Abby cannot continue their illicit affair—not when her young son’s future hangs in the balance.

Peter knows well that many things are sweeter when protracted, but what he wants from Abby goes beyond ordinary desire. He wants her to himself, to devote his entire being to making her wildest dreams come true. And so he turns to his oldest friend, Lord Valentin Sokorvsky, and Val’s wife Sara, to abet his cause. Now these wanton friends are banded together for love, for pleasure, and for happily, wickedly, ever after…

Note: This novella follows characters that have been introduced earlier in Simply Sinful and Simply Sexual. You will get more out of Simply Irresistible if you read those first.

“Peter, will you please sit down?”

Valentin frowned as his business partner and occasional lover stood up again to compare the time on the clock on the mantelpiece against his pocket watch. They were in the study in Valentin’s town house and he was trying to finish writing a letter.

“Abby said she’d be back at six. It’s almost seven.”

“She’s with Sara. I should imagine she is quite safe.”

“I suppose I worry too much.” Peter sighed. “Even persuading her to come to the city was difficult. She doesn’t like leaving little Jamie.”

“Which is why Sara brought my son and heir with us. She is far happier when she can see his mischievous little face.”

“As are you, Val. You can’t fool me. You dote on the boy.” Val didn’t bother to answer that. Sometimes, his feelings for his son were far too private to share even with his best friend.

“Abby fears that Jamie will become ill in the noxious London air.”

Val raised his eyebrows. “Are you sure that’s the reason she didn’t bring him? It seems most unlike Abigail to fuss.”

Peter sat back in his chair. “Well, there is the matter that the boy has fair hair and blue eyes. I’ve been mistaken for his father more than once.”

“Don’t remind me.” Peter shoved a hand through his already disheveled blond hair. “Jamie is James’s heir. Despite everything, that’s how both Abigail and James wanted it.”

“While Abigail’s lawful husband lives in sin with his agent in the West Indies and Abigail for all intents and purposes lives with you?”

“I keep up appearances, Val. I really am her land agent, and I maintain my own establishment.”

“And you hate having to do all of it.”

“Of course I do. But I also love them both. I can’t think of a way to make things any better.” There was a weary note in Peter’s voice that Val had heard far too often lately.

Peter glanced at him. “That’s not enough for you?”

“You seem less resigned to your situation than you used to be.”

“We are arguing a lot.” Peter studied the shine of his boots.

“Abby wants to have another child and James is too far away to have any hope of being considered the father of this one.”

“He doesn’t intend to come back to England in the foreseeable future even for appearance’s sake?”

“Abby asked him if he’d return long enough for her to ‘fall pregnant.’ James said he no longer wants to bed women or even to pretend to do so.”

“I wish Abby could divorce him, but that’s impossible. Do you know that she would have to prove him insane, impotent and immoral even to stand a chance of getting anyone to take up her case? And then James would have to divorce her and young Jamie’s parentage would be in doubt, and he might lose his right to the title. It’s a horrible mess.”

Peter looked up. “You’re not helping much.”

“Despite my supposedly exalted position, I can’t single-handedly change the laws of this land even if they are patently unfair and ridiculous.” Val hesitated. “I could call in some favors and secure James a divorce if that would help, but it is an expensive, drawn-out procedure, and Abby wouldn’t be any better off at the end of it. Her reputation would be ruined, and she certainly couldn’t marry you if you were named in the court proceedings.”

“And don’t forget that young Jamie would be disinherited and unwelcome amongst the ton,” Peter said gloomily. “We already know all this. We’ve discussed it endlessly. I can’t do that to Abby and James. Devil take it, I like the man.”

“He certainly likes you. I remember him collared and naked at your feet at the pleasure house.” Peter smiled. “James likes to be mastered. I think he found his match with his overseer. From his letters he is extremely happy both in and out of bed.”

“Which doesn’t help you and Abby in the slightest.”

“It’s rather ironic, isn’t it? I’ve spent my whole life living on the edge of society, indulging my sinful appetites, and now all I want is to settle down with the woman I love and have my own family.” Peter’s smile was wry.

“It certainly is a difficult situation in which to be,” Val said carefully. Peter’s smile faded. “I think Abby used Jamie as an excuse not to want to come to London. I suspect she doesn’t want to be seen with me.”

“I’m sure you are incorrect. Abby loves you very much.”

“Enough to want to protect me from the gossips. But I wanted to come to see you.” Peter hesitated. “I wanted your advice.”

“Don’t be obtuse, Val. About my situation.”

“I wish I could help you more, but I’m not sure what else there is for me to say.”

A knock on the door heralded the arrival of the butler, who bowed to Val. “I have a message from her ladyship, my lord. She will not be back until much later. She’s taken Lady Beecham out to the theater.”

“You are welcome, my lord.” He paused. “If we are not to wait for the ladies, dinner is ready to be served if you and Mr. Howard require it.”

After the butler left, Val returned his gaze to Peter. “See? They are both perfectly safe and having a splendid time without us. Shall we adjourn to the dining room and have our dinner?”

“I suppose we should.” Val rose and patted Peter on the shoulder. “Courage, my friend. These things have a way of working themselves out given time.”