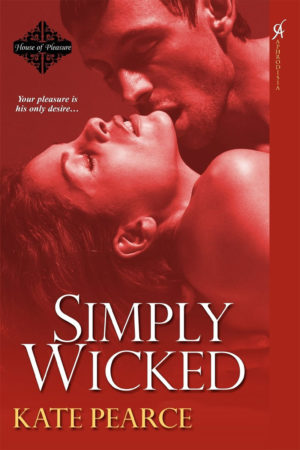 “Even if you’re unfamiliar with the House of Pleasure series, this story serves as an excellent introduction to the small community of sexually liberated characters living in Regency London. The romance could have fallen prey to a homophobic “conversion” narrative in less practiced hands, but Pearce writes convincingly and expertly. Add an intricate plot, vivid characters, sizzling sex and a dastardly villain for a deliciously well-crafted page-turner.”
—4 1/2 Stars, Michelle Wiener, RT BOOKreviews

“Two deeply scarred people come together in SIMPLY WICKED, and together they merge to heal each other and fall in love. There are scenes of male on male sex, but it is the burgeoning love and sexual heat that builds between Anthony and Marguerite which makes SIMPLY WICKED a riveting read. Together they overcome the obstacles put forth in front of them and readers will know that they belong together. The sex scenes are scorchers, but without them, SIMPLY WICKED would lose the powerful impact that it brings to readers.

“Sinister characters and dark moods which threaten our lovers, Anthony and Marguerite, in SIMPLY WICKED bring forth a triumph of redemption and new beginnings and a book I highly recommend readers put on their to-be-bought list.”
—Holly Tibbs, RRTErotic

“Kate Pearce has once again delivered an emotionally powerful and highly sensual love story. Her stories touch you with their deeply passionate characters, and Simply Wicked is the perfect example. Marguerite and Anthony are wonderfully expressive in their desires for each other as well as their need to experience the darker side of sexuality. Addressing the story behind Anthony’s pain in more detail is something I would love to see included.”
—4 Cups, Lototy, Coffee Time Romance & More

Anthony Sokorvsky’s only rule in life is not to have any, especially when pleasures of the flesh are involved. But his dark sexual pursuits have led him down a treacherous path that may cost him his fortune if he doesn’t end his recklessness and wed. His salvation comes in the form of Marguerite Lockwood. Just one day in Marguerite’s presence leaves Anthony lusting after her and fantasizing about all the ways he can bring her to new heights of delirious scorching ecstasy.

Anthony Sokorvsky opened one eye and swiftly closed it again. The birch floorboards he’d glimpsed and the black walls hung with instruments of pain and sexual gratification meant only one thing: he was still at Madame Helene’s pleasure house. He licked his lips, tasted dried blood, brandy and the acrid tang of another man’s come.

With a groan he rolled onto his stomach, wincing as his morning erection scraped the rough wood. He was naked and still in the punishment corner. At least someone had had the decency to take the manacles from his wrists. Gingerly he sat up, fighting the urge to retch with every painful movement. What the hell had he done last night?

He stifled another groan. Nothing worse, he suspected, than he’d subjected himself to for the last few months. But something had changed. For the first time the pain had far outweighed the pleasure. His wrists were bruised, his arse hurt and his back was torn from the lash of a whip. He buried his hands in his hair and closed his eyes.

God, what kind of man allowed himself to be used by other men for their sexual pleasure? At first, it had excited him. Now, it simply felt like he deserved it. He was almost twenty-six; surely it was time to move on?

A discreet cough sounded at the doorway. Blinking, Anthony forced himself to look up. Judd, Madame Helene’s butler, bowed and held out a brown embroidered dressing gown.

“Good morning, my lord. I have a fresh set of clothes waiting for you downstairs in Madame’s apartment and a bath if you would like.”

Vaguely, Anthony looked around for his own clothes and couldn’t see them. With a sigh, he held out his hand for the dressing gown.

He couldn’t bear to meet the older man’s gaze. What must the butler think of him wallowing in a shameful pool of lust of his own making? His last conscious thought before sexual pain and pleasure had converged to render him senseless, was of Lord Minshom bending over him. His laughter as Anthony came helplessly against the unforgiving floor.

Grimacing, Anthony stumbled to his feet and grabbed the mantelpiece for support. There must have been others. Faceless, nameless men he’d allowed to fuck and fondle him, hurt him if they liked. God, what was wrong with him?

Sunlight streamed through the windows on the lower levels as Madame’s efficient servants brought the house back to perfection before the revelry began all over again. He felt his way down to the basement where Madame kept her apartment, breathed a sigh of relief when he found the bedroom empty, the bath beyond already filled and awaiting him.

With a groan, he sank into the perfumed depths. His flesh stung as he discovered new hurts inflicted upon him. Even his hair was filthy with other men’s leavings. He slid down into the bath and allowed the water to close over his head. For a long moment he held his breath, thought about letting it out, of water filling his lungs, of peace…

He resurfaced with a start, to find Madame Helene sitting beside the bath. She wore a plain blue gown which did little to dim her natural allure. She was easily the most beautiful woman Anthony had ever seen, and he had observed plenty at the pleasure house—madame made sure of that.

“Anthony, why are you still here?”

He blinked slowly at her, allowed the water droplets to run down his face.

“I’m not sure. I must’ve fallen asleep.”

She sighed and leaned forward to pat his shoulder. He swallowed hard at the soft contact. After the harshness of the night, her touch was almost unbearable. His eyes began to sting.

He sat up straighter to study her concerned face. “God, Valentin doesn’t know what I do here, does he?”

She shrugged, the motion as fluid and elegant as a cat’s. “I haven’t told him, but Peter knows. I’m not sure if he would tell your brother or not.”

Anthony continued to stare at her, his fingers gripped the edge of the bath until they hurt. “You won’t ever tell Val, will you?”

“Why not? He of all men might understand why you allow these men to do what they want to you.”

“Val wouldn’t understand. After his experiences with Aliabad in Turkey he told me he hates being touched by men. What the hell is he going to say if he thinks I enjoy it?”

Her enigmatic smile was fleeting. “Your brother is a very complicated man. Perhaps you worry more that he still feels responsible for what happened to you.” She stroked his wet skin. “We all feel responsible, Anthony, you were forced into an intolerable situation, drugged, raped and held hostage by a man who…”

“I do not want to talk about Aliabad. It happened years ago.” He glared at her. “In truth, I will not discuss it, ever. It has nothing to do with my sexual tastes now.”

Helene stood up, her smile disappearing. “Denial didn’t work for your brother. Why should it work for you?”
Anthony let out his breath. “I’m sorry, madame. You have been nothing but kindness itself, but I cannot continue this ridiculous conversation. I’ve decided to change my ways. I no longer intend to avail myself of your punishment rooms.”

Helene’s skeptical expression didn’t change. “I’m glad to hear it. Perhaps it is time for you to investigate the lighter side of love and romance.”

He managed to nod. “Perhaps you are right.”

She turned toward the door. “Do you wish me to send a message to the shipping office?”

He frowned and tried to look around for a clock.

“A little after ten.”

“Then I’m already doomed, I had an appointment with Valentin at nine.”

To the sound of Helene’s soft laughter, Anthony sank back down into the bath until his head was under the water. Val was extraordinarily perceptive. One look at Anthony’s face and he would not only demand an explanation for his lateness, but insist on examining his every action for the past week.

He sensed Helene didn’t believe he meant to change. What did she see in him that made her doubt him? Did he somehow advertise his willingness to be abused on his very countenance? He resurfaced and reached for the cup of coffee Helene had set down for him beside the bath.

Anthony’s startled gaze flew to the doorway. Framed against the sunlight stood Christian Delornay, Helene’s son. A permanent fixture for the last year at the pleasure house, seeing as he now lived there and worked for his mother. In the past, Anthony had never paid much attention to him, being far too busy with his own pursuit of sexual excess to worry about another man’s.

Christian shrugged, the gesture eloquent of his French upbringing as was his slightly accented English. From his prone position in the bath, Anthony took Christian’s measure and reckoned they were of similar height, although as he understood it, Christian was only twenty.

At Christian’s amused tone, a now familiar burning rage churned in Anthony’s gut.
“Absolutely, and you can get out as well.”

“I am perfectly within my rights to be here. This is my mother’s dressing room after all.” Christian moved closer until Anthony was forced to look up at him.

“You often frequent your mother’s bedroom do you?”

Anthony closed his eyes. “Get out.”

“I will if you agree to have dinner with me and my sister tonight.”

“Why would I want to do that?”

Christian skimmed his fingers along the rim of the bath. Anthony couldn’t take his eyes away from the slow gliding motion.

“Because I asked? Because you wish me to go away so that you can finish your bath in peace?”

Anthony glared up at his smiling companion. “I said I would, now get out and shut the door behind you.”
Christian bowed. “We will see you at seven then in the main salon.”

As soon as Christian left, Anthony got out of the bath and dressed hurriedly in the plain brown coat, black breeches and matching waistcoat Judd had left for him. If he caught a cab down to the shipping office by the docks he should still be able to meet Valentin. He paused to check his reflection in the mirror. His lips were a little bruised and swollen, but apart from that, he looked well enough. Lord Minshom was always very careful not to mark his lovers above the neck.