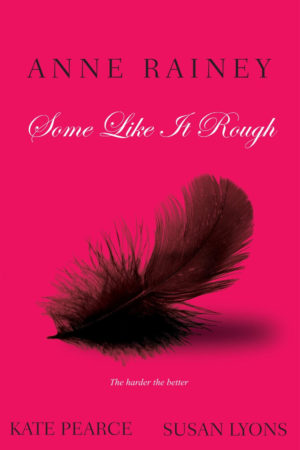 “Kate Pearce has penned a sizzling tale with SOME LIKE IT ROUGH. Gulch Town could be any rural, western town in the United States, but the close-then-ripped-asunder relationship of Luke, Paul and Julia isn’t. The chemistry and unspoken desire between the three percolates until it’s a raging river ready to spillover—or split their friendship. Luke has secrets he hasn’t told his friends. Is now the time to reveal it all? And how do Julia, Paul and Luke really feel about each other? Can they remain friends in the future—or are they daring to rip their lives apart?

“Cowboys, sexy men and a scorching triangle. What more could a reader ask for in SOME LIKE IT ROUGH?”
—A Perfect 10! Holly Tibbs, Romance Reviews Today

“Ever wondered what it would feel like to be loved by two men at once? And have them love each other as well? Ever thought about trying something new to find your inner vixen? Or tried a new game in bed only to find it’s your favorite of all? Then you need to read SOME LIKE IT ROUGH! Because, well, whew! It’s hot!

“There are few stories that make me squirm in great ways, but this collection was one of them. These authors know how to push the envelope while keeping the tone of the stories sensual and inviting.”
— 5 Cherries, Tiger Lily, Whipped Cream Reviews

Luke Warner wants to chill out when he cashes in his stocks and returns to his hometown. But things heat up when he reunites with his best friends, Julia and Paul, and invites them both to share in a sexual adventure like they’ve never had before…

Assigned to work undercover as an exotic dancer, straight-laced Haley Croft discovers the thrill of strutting her stuff. And when she catches sexy Ry Montana checking out her moves, she can’t wait to give him his own private show…

“Cherry On Top” by Anne Rainey

When massage therapist Cherry DuBois rubs her oil-slicked hands all over Dante Ricci’s rock-hard body, red-hot desire courses through her. She longs to lose control and give herself to the pleasures of sexual submission…

Luke Warner leaned back and squinted up at the hole in the ceiling, certain he could see the blue sky beyond. He sure had his work cut out for him, but that was what he’d wanted, right? Something to do with his hands, something to connect him to his past. He grimaced as his gaze swept the broken countertops and shelves, the holes in the floor, the leaking pipes.

The old Warner family drugstore on the corner of Keystone and Main in Gulch Town, California had definitely seen better days. For some reason, he’d decided it was his job to put it right. It smelled of dirt and mildew now, but once, the store had its own distinct odor of popcorn, coffee, and candy. Luke remembered sitting on a high stool watching his grandpa weigh a handful of pills on the old scales, the way he’d wrapped them in brown paper, the clunking ring of the manual cash register.

His father hadn’t wanted to run the shop, and it had been left to rot until Luke had shown up and demanded the key from his perplexed Aunt Josie. With a sigh, he picked up his sleeping bag and rucksack and walked to the back of the store. There was one room with a door that still locked and an outside toilet with running water and a sink. That would have to do until he got himself fixed up.

He laid out his sleeping bag, stretched out on it, and kicked off his dusty boots. It was a small town. It wouldn’t take long for folks to hear he was back. He smiled into the gathering shadows. What would Paul and Julia do then?

Paul let himself in through the back door of Julia’s small condo and found her in the kitchen stirring something that smelled like chicken on the stove. He came up behind her and planted a kiss on the back of her neck. She squeaked, and he wrapped his arms around her hips and nuzzled her throat. Strands of her silky brown hair tickled his face. She dropped the spoon into the pan and swung around to face him.

He touched the brim of his Stetson. “No, ma’am, I was brought up in a barn, remember?”

She leaned back against the countertop, her grey eyes serious, her normally laughing mouth a worried line. “That joke is getting old.”

“Yeah, I reckon I’ve been making that one since kindergarten.” He raised his eyebrows at her. “So, what’s up? You seemed kind of jittery when you called.”

“I just spoke to Roxanne. She says Luke is back in town.”

Paul blinked at her. “Our Luke?”

“Well, he’s scarcely ‘ours’ anymore, is he? We haven’t seen or heard from him in ten years. But Luke Warner is definitely here.”

“What do you want to do about it?”

“About Luke?” She shrugged, and one of the thin straps of her blue camisole fell down from her shoulder. He noticed she had no bra underneath. “I don’t know.”

Paul stepped closer until his large body was only inches away from Julia’s. Her nipples tightened through the thin cotton of her cami, and her breathing hitched. He put his hands on her waist and set her on the tiled countertop, reaching over to turn off whatever was cooking on the stove.

She looked up at him, and he bent his head and licked a slow, lascivious line along the seam of her lips.
“He’ll be hard to miss in a town as small as this.”

“That’s not an answer.” Paul slid a hand under her camisole and cupped her right breast, used his finger and thumb to twist her nipple to a hard, needy point. She sighed and shoved her hand into his hair, wiggled closer to the edge of the counter, until her sex rode the thick ridge of his cock in his jeans.

“You want to see him up close and personal, right?” He murmured between kisses and nips. He went still when she caged his face in her hands.

“Don’t you want to know why he left?”

She smiled at him and unbuckled his belt and straining fly. “But, you’re worried I’ll run off with him?” She wrapped her hand around his cock and squeezed hard, just the way he liked.

“Yeah,” he admitted, as she pulled down her shorts with one hand and let them fall to the floor. “You always liked him best.”

His fingers plucked at her clit and then slid into the thick wetness of her pussy. He took her hand away from his cock and shoved himself deep into her slick heat, held still as she shuddered around him. Sometimes he liked it like this, hard and fast, Julia having to catch up, giving him every orgasm right around his thrusting shaft rather than against his fingers or mouth.

She stroked the back of his neck, her fingers soft. “I don’t like him best. I like you. You stayed, remember?”

He lifted his head to stare at her. “I had no choice. I couldn’t go off and leave the ranch, now, could I?”

She smiled at him, and he had to smile back. “I don’t mind if you see Luke, honey. I’d like to see him myself.”

“You would?” Julia studied him and then her gray eyes narrowed. “Not if you’re going to beat him up, Paul.”

“I wouldn’t do that.” He pulled out of her and handed her his handkerchief to clean up. “I’d sure appreciate an explanation though. He was my best friend, too. We did everything together, had our first smoke, our first beer, our first mutual jerk off…”

Julia slipped down from the countertop and pulled her shorts back on. Her slow, dreamy smile indicated that she was as caught up in the past as he was. “If it was so sweet, why did Luke skip town right after?”

Paul tucked his cock back into his boxers and zipped up his jeans. “I don’t know. That’s one of the reasons I want to talk to him.”

Julia washed her hands and turned back to the stove. “I hear he’s staying at the old drugstore on Main.”

“That wreck? Why the hell isn’t he bunking with his aunt? Maybe he’s out of money and came back because he had no choice.” Paul sat down at the table and stared at the stove expectantly. It was a five mile drive back to his ranch, and he already knew he had nothing but beer and beef in his refrigerator. If he was staying over, and after Julia’s call, he’d had no choice but to turn around and come see her, he loved getting fed as well as fucked.

“I have no idea, but perhaps we should drop by tomorrow and see how’s he’s doing?”

Paul grinned at her. “Yeah, perhaps we should.”