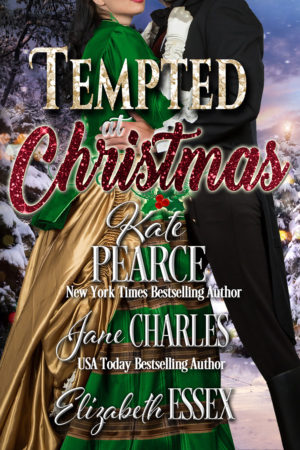 including And a Pigeon in a Pear Tree

The Earl and Countess of Banfield cordially request your attendance at the wedding for their daughters: Lady Tamsyn Hambly to Mr. Gryffyn Cardew, & Lady Morgan Hambly to Harold Mort, Viscount Blackwater, on the 24th day of December, 1811, at Castle Keyvnor, Bocka Morrow, Cornwall.

TEMPTED AT CHRISTMAS (Christmas at Castle Keyvnor) includes:
Kate Pearce’s And a Pigeon in a Pear Tree
When stuffy Benjamin Priske, Baron Saxelby, heir to the Earl of Widcome arrives at Castle Keyvnor, he not only falls in love at first sight, but is accidentally mistaken for his valet. As he spends time with Henrietta, the witty, beautiful, and self-assured granddaughter of the castle housekeeper, he’s increasingly reluctant to reveal his true identity and spoil the most remarkable days of his life. Can Benjamin overcome his rigid nature, embrace the magical nature of Keyvnor castle, and maybe indulge in a fairytale romance all of his own?

Jane Charles’ His Mistletoe Miss
Anthony Beck, Viscount Redgrave, has always done what was expected of his title and station. Ever the dutiful son, he abides by his mother’s requests even when they tend to the ridiculous. There is no other reason, after all, that he would visit a gypsy camp to acquire a piece of magical mistletoe that should direct him to the path of true love. Luckily at the gypsy camp, he happens upon the one lady he’s always wanted to court. Unfortunately, she’s in love with her guardian… Miss Holly Prescott is not in love with her guardian. It is her duty, however, to make certain that nefarious young ladies with hopes of becoming his duchess, don’t trap him into a loveless marriage. While attending the Christmas Eve weddings at Castle Keyvnor, Holly learns that the nearby gypsies could be of help in that regard. However, she did not expect to stumble upon the handsome and oh-so-honorable Lord Redgrave in the process.

Elizabeth Essex’s A Merry Devil
Captain Matthew Kent has always been bound by his service to the Royal Navy. But when the Admiralty rewards him handsomely for cleaning out a nest of Cornwall smugglers, he is tempted to throw it all away for a second chance with Tressa Teague, the very woman he should not admire—a smuggler. Tressa is the daughter of the vicar, expected to be everything sweetness and light. But instead she has the heart of a pirate. She thought she’d seen the last of the dangerous sea captain who left her heartbroken before. But when he returns to the rugged coast of Cornwall to offer her the chance of a lifetime, will she lose her freedom, or only her heart?