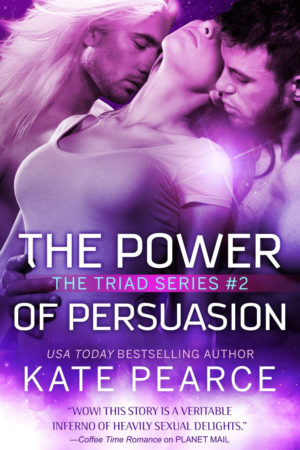 Ex super-soldier and telepath Captain Ian McNeill isn’t expecting his job as base commander to a bunch of scientists to be exciting, let alone terrifying. But after meeting Neeve, a Pavlovan female and saving her from a bunch of Etruscan extremists, he’s fairly certain his life will never be the same again.

Neeve can’t believe she’s found a mate from Earth who has no understanding of the concept of a bonded telepathic triad. Can she convince him to return to Pavlovan, meet her exalted but complicated family and finally convince him that adding a third to their bond will be the best decision he’s ever made?

Neeve stood to attention in front of the new base commander who sat behind his desk, his hands folded in front of him, his rather harsh face devoid of expression. Captain McNeill was a lot younger than the last man who’d held the job, and a lot harder to please. Since his arrival three months previously, he’d set the base on its ear reviewing everything from security details to the catering and lab schedules. No one had a good word to say about him, especially the scientists who hated having their little worlds disturbed.

“I wonder if you’ve had a chance to review my personal file, yet, sir?”

He raised one dark eyebrow. “I can’t say that I have. There have been more pressing things to deal with than delving into the personal business of my subordinates.” He glanced down at his tablet. “I do note, however, that you are a Pavlovan, and that you have been here for almost three years. What else do you think it is imperative for me to know?”

Her cheeks heated at his dry tone. Part of her wanted to walk away, but she didn’t have that option.

“Pavlovan culture is based around the power of the number three.”

He nodded. “So I understand.”

“When I arrived here, my posting was for three Earth years, which will end shortly. I was originally sent here with my Second Male, but—”

“As I said, our culture is based on the power of three. He was my mate.”

“Why not first mate?”

“Because that was the designation he received when he visited the Oracle.”

He looked at her as if he expected more information, but she remained resolutely silent. She would not discuss her loss with a man who probably had the sensitivity of the freezing arctic winds that circled the base like hungry predators.

“So what does the lack of a ‘second male’ have to do with your scientific research here?”

She stared resolutely at a dark spot on the wall past his right shoulder. “My mate was killed by suspected enemies of our planet shortly after we arrived here.”

“It was a political murder?” His voice sharpened.

“It’s all on file, sir.” Which, he should’ve read regardless of his so-called duties…

“Do you think you are in danger?”

“Possibly, but that isn’t the main problem. I’m coming to the end of a three year cycle, and my Second Male is dead.” She cleared her throat. “I have certain… biological needs that were triggered by finding a mate.”

“What kind of needs?”

He leaned back in his chair and regarded her steadily. “What exactly does that entail? Do you go into a breeding cycle like the Kelevans?”

Neeve relaxed slightly. For the first time since he’d taken over the base, she was grateful for his cool, detached manner.

“If I had mates, it would certainly be the time to consider breeding. But in this instance, as I’m alone, it simply means my responses are heightened, and that I would be seeking out my sexual partners.”

“Do you become a sexual predator?”

“Nothing quite so dramatic, sir. Everyone on the base is quite safe because none of you are Pavlovan. For three days in each Earth month for the next three months, I will need to be off duty and possibly sedated to control those natural impulses.”

“And what if there’s an emergency during the time you require off?”

She finally met his gaze and noticed that his eyes were a very dark blue that looked almost as black as his uniform. He was a hard male to fathom, this new commander of theirs. As a telepath she usually found human minds easy to read, but not this man’s. He’d developed shields a Pavlovan would be proud of. She had no idea why.

“If I was sedated and the base was under attack, I would have to trust you to make a decision about whether to leave me behind or try and wake me up, sir. I understand that I might be a liability.”

He regarded her steadily for a long moment and then nodded. “I appreciate you telling me this, Doctor. When do you anticipate needing the time off?”

“Then we’ll work around you. I’ve been told to accommodate the needs of our Pavlovan guests very carefully indeed.”

“I wasn’t suggesting that you had.” He rose to his feet signaling the audience was at an end. He was tall for a human, topping her by a head. “Thank you.”

She saluted and walked out, slowly shutting the door behind her, and made her way back to the lab. Heeze, that had been embarrassing, but it would’ve been worse if she suddenly started losing focus during a mission and tried to screw someone. For the captain’s benefit, she’d tried to minimize the effect the three days would have on her as she yearned for a mate who was no longer alive. It would be extremely difficult and emotionally devastating. She missed Malke like an amputated limb, but a human male like Captain McNeill, whose species was only just starting to develop telepathic links, wouldn’t understand that.

Which was why she’d kept the information to the more practical and physical aspects of her needs. What was strange, and was something she’d decided to keep to herself was that after two years her urge to mate had suddenly returned with a vengeance. With almost no available partners on Earth, she’d assumed her instincts would remain dormant until she returned to Pavlovan and sought out the Oracle to find her another mate. But perhaps she had just been in mourning?

She wished she had someone to ask, but all her family were still on Pavlovan. It was ironic that she’d spent half her life wanting to get away from her home planet and now missed it more than she would ever have believed. Losing Malke had only made things worse, but she’d been determined to finish out her three-year stint and then go back. She had some pride…

She reached her lab and collapsed into her chair. At least that was over. Now all she had to do was focus on her work until the heat took her, and she could sleep the worst of her natural instincts away.

Captain Ian McNeill put down the file he’d been reading and rubbed his eyes. With the lack of natural light within the base, it was difficult to tell what time it was, but he sensed it was late. Dr. Neeve was a very interesting female with abilities Earth scientists were just starting to observe and recognize in the ever-evolving human population. It was a shame her mate had been killed. Despite her desire to keep things away from the personal, he’d sensed her deep grief for her male. She’d reminded him of how he’d felt about losing Leah…

He pushed the darkness away and concentrated on the present. For some reason, the government was on high alert about the latest feud between the Pavlovans and the Etruscans. All base commanders had been ordered to keep a close eye on their off-world personnel.

Not that he had many personnel. He could only surmise that he’d finally pissed off someone high enough in rank to get him sent on this shit poor assignment at the end of the frigging world. His particular skill set was hardly useful in a research center, and he certainly hadn’t endeared himself to the scientists. But was there more to it than that? Dr. Neeve had mentioned her mate was murdered. Did the government think she needed special protection? Was that why he was there? If so, he wasn’t sure if he appreciated becoming someone’s bodyguard without being informed about it.

He opened a link to the central military operations room in London, and the disgruntled face of one of his only friends left in the military flashed up.

“What the hell, Mac? It’s three o’clock in the morning.”

“You’re awake and at work, so what’s the problem?”

“Good to know that the security of our planet is in such safe hands.”

“Sure.” Dan’s face wavered and then reappeared against a blue screen. “This better? Now what’s up?”

“Do you know why they assigned me to Nimbus?”

Dan blinked. “Because the commander retired.”

“Oh shit, haven’t they told you yet? Have you checked your security filters?”

“Okay, but promise me you’ll check you have them set up right because I’m fairly certain you should have had this information.” His smile faded. “You’ve got one of the Pavlovans up there, right?”

“You’re supposed to be protecting her with your Extra Special Skills.”

“I thought we weren’t supposed to use them anymore.”

“Yeah, well, the experiment is technically over, and the unit disbanded, but they can’t change what they did, so they might as well make use of us.” Dan scrubbed a hand over his face. “I don’t like it any more than you do, but from what I hear you might be the key to her coming out of this latest inter-planetary conflict alive.”

“I don’t know why this doctor is so important, but they send the best to look after her—you–so you’d better be prepared for anything.”

“Thanks for the intel.”

“Well hell,” he murmured. Fingers flying over the keyboard, he called up all seven of the different messaging systems on his tablet and finally located a file in his trash that looked like something his government would send. It took another five minutes to find the necessary security codes to open the fucker, but he managed it at last.

Ian read the remainder of the coded message. It was pretty straightforward. He was to guard the Pavlovan with his life from an undisclosed threat. He was cleared to use his augmented powers if necessary.

Now that was unheard of. Mac sat back. Neeve must be a very important person indeed if the military were prepared to use him to protect her. He reread her personal file and that of Malke, the male who had been killed, but there was no more information to be gleaned there. How the hell was he supposed to protect her if she was knocked out for three days? Was he expected to sit by her bed and hold her hand?

Not that it would be a hardship. She was a beautiful woman with pale skin long reddish hair and deep brown eyes. She spoke quietly, but there was an air of authority about her that made others listen. Her scientific research was considered groundbreaking and offered hope to millions of humans with defective gene alignments. Was that why the government really wanted to keep her alive—to benefit their own kind? He wouldn’t put it past them.

And she would soon need sex…

Mac shut down the files and detached his mind from his tablet. Whatever the situation, he had the ability to keep her safe. After all, that was what he’d been trained for, not to run a research station in the freezing cold asscrack of the universe.