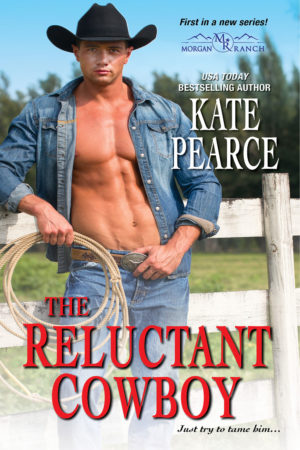 After a turbulent childhood, the Morgan brothers went their separate ways, leaving the family cattle ranch and their cowboy days far behind. But now, one by one, they’re being called back home to California. Have they been summoned to save the land—or to start a new legacy?

Chase Morgan high-tailed it away from ranching life as soon as possible. But running a successful technology company can’t erase the memories, or secrets, of his youth. Coming home to help his Grandma Ruth may finally put some ghosts to rest—if he can just get a certain smart, beautiful houseguest out of his business. But getting her out of his head is proving even more difficult…

Determined to save the Morgan ranch, historian January Mitchell has pinned her hopes on the surprisingly rugged, surprisingly likable, and exasperatingly stubborn Chase. Surely his love of this breathtaking, mysterious land runs deep enough that he’ll once again embrace his inner cowboy. Or maybe, despite both of their skittish hearts, she’ll have to find a way to get him back in the saddle…any which way she can.

She was just being nosey. That had always been her problem. She always had this stupid idea that she alone had the power to make things better for people. As a result she’d spent more years than she cared to remember taking care of everyone else’s needs but her own.

But not anymore. She’d finally grown a spine, and no man was ever going to turn her into a doormat again.

“What was your favorite thing to do on the ranch when you were a kid?”

“I liked to herd cattle. I was pretty good at it. My dad said I—” His emerging smile disappeared.

January desperately tried to think of another topic of conversation, but eventually settled on silence. It took all her concentration to keep the old truck on the dirt road, so she focused on that. Beside her, Chase made no effort to speak either as he hung on to the strap to counteract the swaying of the truck. He moved easily with an athlete’s grace, his expression now as amiable as ever. She could only wonder how he dealt with Silicon Valley CEOs and other venture capitalists. That killer charm and calm demeanor must confuse the hell out of them.

“Are you always this relaxed?”

He glanced down at her. “When I’m being driven by someone I don’t know? Nope.”

So he’d decided to change the subject himself. “Is that supposed to be a compliment?”

“Well, I haven’t jumped out screaming or wrested the wheel away from your control, so, yeah.”

She couldn’t help but grin at that. “I used to drive all the farm equipment back home.” She braked hard and turned the last corner, bringing the truck to a halt with a screech of tires and a showy plume of dust. “Even the combine harvester.”

He hadn’t moved an inch in his seat and still looked remarkably unperturbed. She wondered what it would take to shake his composure.

“Do you ever lose your temper?” The question was out before she could stop it.

“Not really.” He took off his seatbelt and considered her. “I don’t find it a productive thing to do.”

“But you must get mad sometimes, or frustrated or—”

“Sure I do, but losing my temper doesn’t help solve a problem, does it?” He got out of the truck and started to collect his bags. “I’d rather find a solution without letting things get out of hand.”

“That’s really . . . admirable.” January grabbed two of the boxes and the mail. “What made you decide that?”

“I’m not sure what you mean.” He paused to study her.

“No one’s born like that. At some point in your life you must have made a conscious decision not to lose your temper.”

“Must I?” He turned toward the ranch and started walking. “Perhaps I just hated watching other people getting angry and realized I never wanted to be like that.”

She followed him up the steps. “My mother was a passive-aggressive martyr. I swore I’d never be like her.”

He held the screen door open for her. “I can’t imagine your being passive about anything.”

“I’m not.” She stopped and found herself staring up into his amused blue eyes. “I do ask a lot of terribly invasive questions, though.”

His smile revealed a dimple on his left cheek and his perfect teeth. “Nothing I can’t handle.”

She dropped her gaze and moved past him. “I’ll put these things on your bed, okay?”

He followed her up the stairs, and she walked past her bedroom door to the one at the end of the hallway, which was ajar. A faded patchwork quilt covered the queen-sized bed, and the room smelled of the lavender sachets Ruth sewed and left in the drawers and closets. January put the boots down on the rag rug and turned around, bumping into Chase who was much closer than she’d anticipated. He steadied her, his hands grasping her forearms.

“Thanks for helping me out today.”

“You’re welcome.” His hands looked big and capable as he held her. “What time do you want to go out and ride?”

“I need to check up on something at work first, and then I’ll be down.”

“Okay.” She felt like some breathless, silly teenager as his thumb stroked the bare skin of her elbow. She had the strangest urge to lean forward, bury her face in his chest, and just inhale him. “Is there anything else in the truck to bring up?”

He stepped back. “I think I got it all.”

“I’ll check.” She made it out of his bedroom and down the stairs in record time; her breathing uneven and choppy as she took her time making sure the truck was empty. It was too long since she’d stood near a living, breathing man under the age of fifty. It was also obviously too long since she’d had hot and dirty sex with anyone with a pulse. For a moment she allowed herself to imagine him laying her down on that fancy flowered quilt, peeling off her jeans, and climbing on top of her . . .

She jumped so high she almost hit her head on the truck roof.

“Yes?” she squeaked as Chase came to stand alongside her open window.

“You left your keys on the floor in my bedroom. I thought you might need them.”

He lingered by the door, his expression curious. “You okay?”

“Yes, I’m fine, just fine, just sitting here wondering where the heck I’d put those keys.” She offered him a lame smile. “I’m glad you found them. Thanks again.”

He finally went back into the house, leaving January feeling like a complete fool. She was far too old to be attracted physically to someone. She was so over that. What she wanted from a man now had nothing to do with looks and everything to do with his being a nice, reliable, solid kind of guy. . . .

Which apparently, according to Ruth, described Chase Morgan to a tee.

But he couldn’t be nice. It wasn’t fair for anyone to look like that, earn all that money, and be nice. January had learned her lessons about the masks men wore the hard way, and she wouldn’t let herself be swept away again.

But she did want to touch him very badly.

With a subdued curse, she got out of the truck and headed for the barn. There was always something to do out there, and she obviously needed to do something other than think about doing Chase Morgan. Shoveling horse manure would be a great reminder of exactly what she didn’t want to end up neck deep in again.