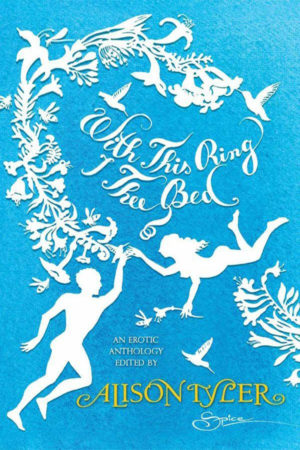 including May the Best Man Win

In this sizzling new treasury, erotica maestro Alison Tyler has assembled over two dozen titillating tales of couples taking each other to new heights of happily bedded bliss.

Imagination and experimentation are the watchwords as sexy spouses live out fantasies both intimate and elaborate: naughty new settings, new toys…even new partners. There are virgin brides, wicked wedding nights, impetuous swingers and some kinky couplings that give “tying the knot” a whole new meaning!

April hesitated outside the hotel door and checked the number against the one written on the back of her hand. Okay, so she’d turned up a couple of days early for her own Vegas wedding, but she was sure Tex wouldn’t mind. She stared down at the pointed toes of her lucky red cowboy boots. He’d be pleased to see her, wouldn’t he? She swallowed hard. So why the hell was she still standing in the hall like a fool?

She knocked on the door and heard Tex’s familiar booming laugh. She fixed a smile on her face as the door began to open.

“Hey, quiet down in there, I gotta get this!”

April stared at the expanse of Tex’s muscled chest, her smile dying as she registered his appalled expression, and his instinctive move to slam the door in her face. And no wonder. Sprawled on the bed behind him were two blondes, naked except for their pink cowboy hats and matching thongs.

Tex stepped into the hallway, shut the door behind him, and tried to kiss April’s cheek. “Babe, you weren’t supposed to get here until Saturday.”

April pretended to sigh. “God, Tex, you’re right. This is all my fault, isn’t it? How dare I turn up when you’re having fun?” She narrowed her eyes. “And how dare you fuck those two tarts when we’re supposed to be getting married on Saturday?”

Tex scowled and ran a hand through his thick black hair. “Babe, they don’t mean anything to me, you know that, it’s just that I get lonely without you….”

April yanked off her engagement ring, grabbed his hand and dropped the diamond into his rope-callused palm. So much for love, so much for marrying the boy next door. Since Tex had become a rodeo star he’d changed, seemed to think he was God’s gift to women and had a right to fuck anyone he wanted to.

“I told you last time that I wasn’t going to listen to anymore of your excuses.” April said. “So I’m done. We’re done. Goodbye.”

April walked away, half-hoping he’d come after her, but knowing he wouldn’t. He was way too full of himself these days and would assume she’d come running back whenever he snapped his fingers. But that wasn’t going to happen anymore. As she turned the corner, tears filled her eyes. All those years of her life and her career, wasted on that asshole. He’d been so sweet when they’d first met, so in love with her, so willing to please…

April jumped as she realized she’d walked right into the checked shirt of another cowboy. This one smelled of leather and sandalwood rather than beer and cheap perfume like Tex. She raised her head and stared into the amused brown eyes of Ben Carlton, an old rodeo friend of both hers and Tex’s. His expression changed and he dropped his hands to her shoulders.

“What’s up, April? I didn’t think you were due in till Saturday. Isn’t that the big day?”

She hastily wiped her eyes. Ben was as tall as Tex but bigger all over. Despite his size, he had a gentle way with horses April had always admired.

“Nothing, much. I just realized that my ex-fiancé is a dumb-ass, two-timing loser.”

“Put it this way, he wasn’t exactly pleased to see me.”

He sighed, “Not those two blondes? They’ve been all over him this week.”

She frowned up at Ben as he walked her toward the bank of elevators. “You don’t sound very surprised.”

Ben pushed his Stetson back on his head. “Jack and I tried to have a little talk with Tex the other night, but he didn’t want to hear us. I’m sorry, April. He’s acting like a complete asshole.”

April forced a smile. ”I got that, but thanks for trying to set him straight.”

“Hell, honey, me and Jack know how much you care for the bastard, and how much you’ve given up for him. You could’ve been a barrel racing champ in your own right if you’d paid less attention to Tex and more to your career.”

He put his fingers under her chin and kissed her nose. “You’re no fool. How about you get a room and meet me in the bar for a drink?” He winked. “I’m sure Jack and I can take your mind off your troubles.”